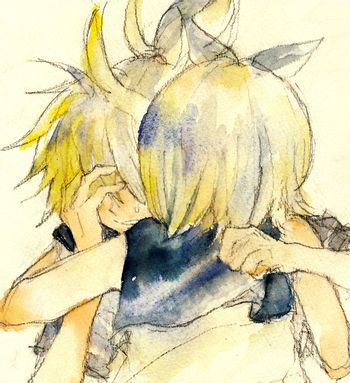 When Len cries, so do we.
Advertisement:

The defining part of the universe is that each of the characters has their own "problem" in their life, thus the name. Their problem could be anything: a physical disability, a mental illness, an unhealthy relationship, an unfortunate situation, a societal taboo, or even serious attitude issues, just to name a few. Their problem significantly impacts their daily life, and more often than not has nothing to do with their career. Each character has their own unique problem, and none of them are exactly alike.

The Problems Universe was created by two Vocaloid fans, Jill and Seth. Both are natively English speakers and live in the US, and neither are Vocaloid producers, although both have musical backgrounds (and Seth owns a couple of Vocaloid products). They are both avid writers and roleplayers. Jill is a college student in Michigan with an Writing major and aspirations to be a published author, and Seth is a high schooler in Florida studying in a specialized graphic arts program for a future in animation.

The AU got its roots in summer 2012, when Seth contacted Jill with a request for her to play the matching Rin to a somewhat unusual Len he had created. Through writing these two, some of the other characters such as Luka and Toeto were established, and soon, the two sat down and organized their thoughts on it, creating character templates and universe settings. Those soon spawned stories, art, more characters, and many other creative works, until it became practically a work in its own right.

The AU has had multiple stories written for it and art drawn for it, as well as several rp plots set in it.