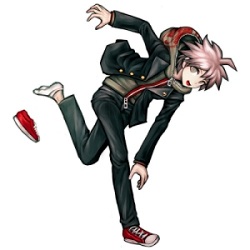 The main character. Makoto hails from an alternate continuity where the Tragedy hasn't happened. But he's also stuck with a rather large bout of bad luck. When incidents occur that let him learn the truth about the multiverse and his place in it, Makoto must take it upon himself and save all of existence from devastation.

Stat-wise, Makoto has the highest Luck stat growth of the cast, making him suited for debuffs and status effects. Aiding him is the fact that as a result of the ritual that got him dragged in, Makoto now has the power to summon beings to aid him in combat. 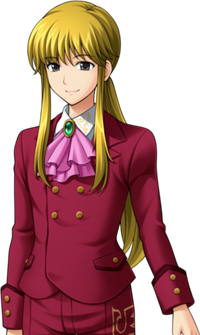 In the Umineko timeline Lion comes from, he didn't become Sayo Yasuda, so Beatrice the Golden Witch doesn't exist and the Rokkenjima massacre didn't happen. He's also been kicking it with the Realmwalkers for a while now and knows a few tricks of the trade.

Lion is a Jack-of-All-Stats, able to use any class well, but lacking a standout stat to power certain moves.

Rhajat comes from a world based closely off the Revelation path of Fates. She was hanging out in the Deeprealm and never got recruited into the campaign until Makoto and Lion ran into her. After seeing Makoto's powers, she decides to join the party to learn more about them.

Rhajat is the group's Black Mage. As a result, any class on her will get big buffs to magic stats, but dinky ones to health and physical stats.

Mei-Fang comes from a universe whose Beholder died, causing her to wind up in Lion's home universe. After accidentally getting involved in a rescue operation, she wound up in the care of the Realmwalkers and is searching for her creator.

She is a Glass Cannon with weak magic due to her Arcana being busted.

A fellow hailing from a radically different version of Final Fantasy XV.

A hyper girl hailing from a world of Digimon.

Tiger serves as the Mighty Glacier of the party.

Yuko functions as the Magic Knight.

The mascot of Nintendo. In this game, there are two of him running around: one based on the games and the other from The Super Mario Bros Super Show!.

Overseers
The big kahunas of the Realmwalkers, who run the whole place and hand out assignments.

A mysterious woman from the Suikoden universe who watches over the Realmwalkers.

Summons
Entities or Summon beings that Makoto can form contracts in exchange of inhabiting his body.

The Legion of Doom that serves as the primary antagonist. Their goal is to bring order to the multiverse.

The one who hired Solo and the leader of the Primal Union, having Beholders killed off for reasons unknown.

A dark necromancer who's summoning and brainwashing monsters to serve his client.

One of the most feared bounty hunters in the multiverse, Solo has been hired by an unknown employer to knock off Beholders and destroy their worlds.

An alternate version of No. 9 from an unknown universe. No. 9 has been hired by an unknown employer and is partnered with Solo.