Base of Operations: Junkertown, Australia (formerly) 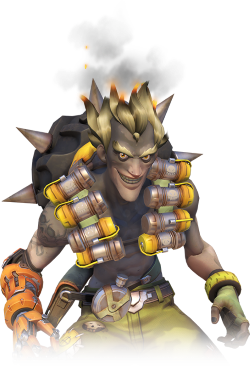 The attack on the Australian Omnium's fusion core forever altered the landscape of the Outback. After the detonation, the area was transformed into a harsh, irradiated wasteland, littered with debris and the twisted fragments of the ruined facility, and unlivable to most.

But there were some who survived. Calling themselves the Junkers, they scavenged the husk of the Omnium and formed a lawless, cutthroat society in its shadow. Junkrat, born Jamison Fawkes, was one of them, eking out a living reclaiming metal and components from the ruins. Like many others, he was affected by the lingering radiation. This touch of madness made him ideal for handling dangerous explosives, a love which he turned into an obsession.

He came to notoriety when he discovered an extremely valuable secret in the bones of the Omnium. Though few knew the nature of what he found, he was nonetheless pursued by bounty hunters, gangs, and opportunists wherever he went, until he made a deal with the Junker enforcer Roadhog, who grudgingly agreed to be his personal bodyguard in exchange for a fifty-fifty share of the spoils.

Now, with Roadhog in tow, Junkrat has left the Outback, and embarked upon an international crime spree leaving nothing but havoc and bedlam in his wake. 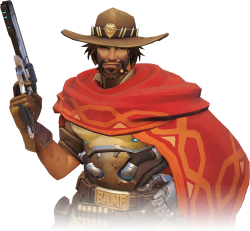 McCree had already made a name for himself as a member of the notorious Deadlock Gang, which trafficked in illicit weapons and military hardware throughout the American Southwest, when he and his associates were busted in an Overwatch sting operation. With his expert marksmanship and resourcefulness, he was given the choice between rotting in a maximum-security lockup, or joining Blackwatch, Overwatch's covert ops division. He chose the latter.

Although he was initially cynical, he came to believe that he could make amends for his past sins by righting the injustices of the world. McCree appreciated the flexibility afforded to the clandestine Blackwatch, unhindered by bureaucracy and red tape. But as Overwatch's influence waned, rogue elements within Blackwatch sought to bring down the organization and turn it to their own ends. Wanting no part of the infighting, McCree set off alone and went underground.

He resurfaced several years later as a gunslinger for hire. But while McCree's talents are sought after by parties great and small, he fights only for causes he believes are just.

After Tracer, Mei, and Reinhardt respectively, McCree is the fourth agent to respond to Winston's recall for the reinstatement of Overwatch. At the time, he was near Indiana or Kentucky in the United States.

McCree can both apply pressure from afar and burst down squishy enemies at close quarters.
Mei - China

Base of Operations: Xi’an, China (formerly) 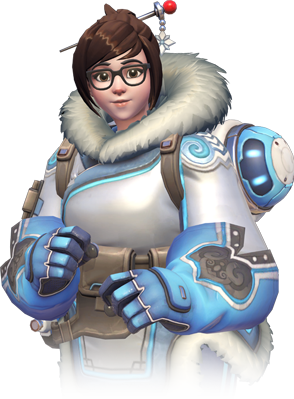 Though many blamed the planet's escalating, unexplained climate phenomena on the advent of new technologies, the rapidly growing Omnic population, and drastically increased consumption of resources, the true cause remained unknown. To find a solution, Overwatch established a series of eco-Watchpoints at remote, critical locations worldwide.

Dr. Mei-Ling Zhou (周美灵 Zhōu Měi-líng Note Her Chinese name can be seen in the news ticker found in the Lijiang Tower "Night Market" map) was a member of this multiyear initiative. A peerless climatologist, she had introduced cutting-edge innovations in the field of climate manipulation that protected at-risk areas in Asia and beyond. She was assigned to the program's monitoring station at Watchpoint: Antarctica when disaster struck: a sudden, catastrophic polar storm battered the installation and cut it off from the outside world, leaving the facility damaged and the scientists stranded. As their supplies dwindled, they entered cryostasis in a last-ditch effort to survive until a rescue attempt could be made.

But that rescue never came. It was years later when the team's cryogenics chamber was finally discovered. Mei, still in hibernation, was the only survivor. The world Mei awoke to had gone through considerable changes: Overwatch was no more, the serious climate issues had worsened, and none of the eco-Watchpoints were in operation. Any clues that they had uncovered were lost.

Mei has decided to continue her work on her own. Equipped with a portable version of her climate-manipulation technology, she travels around the world, hoping to re-establish the eco-network and track down the causes of the threats to the planet's ecosystem.

Mei received the recall to join the new Overwatch after Winston reinstated the organization, indirectly awakening her from cryostasis. She has since rejoined Overwatch, becoming the second member confirmed to accept the call.

Mei uses her cryogenic technology in battle to impair and restrict her foes' ability to move.
Pharah - Egypt

Base of Operations: Giza, Egypt 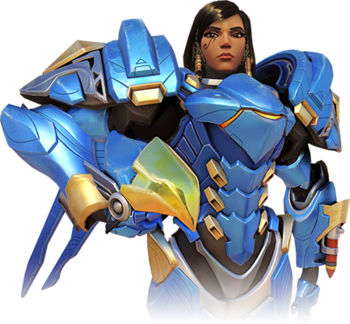 As a child, she dreamed of following in her mother's footsteps, and did so, joining the Egyptian army. Her tactical genius and persistence caused her to rise through the officer ranks, earning the loyalty of all who served under her. She was set to join among Overwatch's ranks, but before she had the chance, Overwatch was disbanded.

After leaving the army with a commendation for distinguished service, she was offered employment with Helix Security International, a private security firm contracted to defend the artificial intelligence research facility beneath the Giza Plateau. The top-secret facility was touted as vital to the safety of not only the region, but countries across the globe. Fareeha gladly accepted the choice assignment and received training in the Raptora Mark VI, an experimental combat suit designed for rapid mobility and devastating firepower.

Under the call sign "Pharah," she works to safeguard the AI installation. Though she mourns Overwatch's passing, she still dreams of fighting the good fight and making a difference on a global scale.

Pharah, as a damage character, blasts areas with suppressive fire and scatters foes apart from the air.