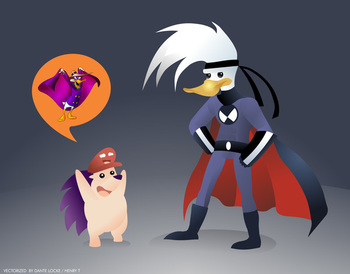 Criticando-T was the name of a blog hosted by the self-proclaimed critic, where he used to review comics made in Spanish-speaking countries like Mexico, Spain or his native Venezuela.

The blog started when the critic reviewed an amateurish manga in the forums of the now extint Zona Fantasma, a fanzine where amateur writers would share their stories with others. After that, he started to review webcomics and comics published in Anime magazines, mostly with a mocking tone in his own personal avatar (inspired by Linkara from Atop the Fourth Wall), and introduced a cute hedgehog named Sorio as its mascot.

The blog had many hiatus-breaks due to the critic' personal life, even leaving the reviews due to the Venezuelan economic crisis. The host of the site, however, helped him with some financial help that allowed him to keep reviewing, until the closure of the site in 2016. Worse, with the site closing, most of the reviews were taken out too.

The blog then moved to La Libreria de Uroboros (Uroboros's library) for a time, but Henry publishing rate was very sporadic, and then the co-host of the site decided to erase it in 2017.

Henry has since moved on from the reviews, and due to a really low interest in turning them into videos, Criticando-T was officially over.

Some of the tropes this review series used to have!