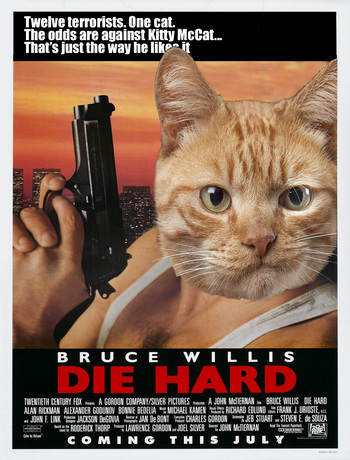 ◊ to see my High School take on the Die Hard poster. (Identity spoilers ahead).
"NO FUCKIN' SHIT, LADY, DO I SOUND LIKE I'M ORDERIN' A PIZZA?!"
—Det. John McClane, Die Hard

Yippee ki yay, motherfucker! You likely don't know me in person, but I go by the name Sky Cat 32 on this wiki; you can call me Sky, I guess.

Just in case you couldn’t tell by my troper page pic, troper page quote, a disproportionate number of my usual avatars, my usual forum signatures, or where I usually say I’m from (I’m not actually from Nakatomi Plaza), I’m a big fan of Die Hard, and not just because I'm a male in my twenties. If you haven't seen that movie, get off your computer, and watch it; don't message me until you see it. (Not really, but you don't know what you're missing.)

I frequent various forums and cleanup threads on TV Tropes, and occasionally edit their sandboxes.

In real life, I studied for a Computer Assisted Drafting Certificate and pursue a goal of becoming a Drafter, hence why I jokingly call myself "The Draftsman of Doom".

I am a Jewish Religious Zionist with a largely Centrist political orientation, and I am on the Autism Spectrum. That said, I do not use this website to discuss politics or religion, except, occasionally in the latter case, with how tropes apply to religion. Please don't message me about politics or religion (except with regard to tropes applying to the latter), even on the off chance that I agree with what you may have to say. I use this website for fun, not to argue about real world problems.

open/close all folders
Tropes Which Supposedly (and in some cases DEFINITELY) Apply To Me
Tropes I Have Launched
Pet Peeve Tropes
Trope Images I've Successfully Suggested
Complete Monster, Levelheaded vs. Emotional
Standard Bearers of Heinousness

The following villains set the bar for Heinousness in their respective genres/niches:

Favourites in Media
The following are my favorite works of media, and occasionally, favourite parts (including moments, characters, ships and quotes) within said works:
Useless Trivia
Other Accounts

You must be really bored if you got to the end of my page. Why don't you find something better to do. Like watch Die Hard.