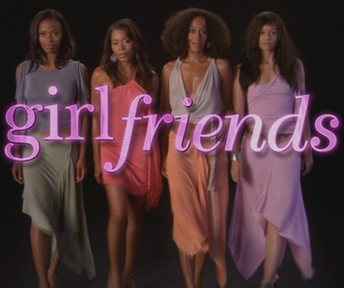 One of the longest-running sitcoms with a predominantly African American cast, Girlfriends aired on UPN (2000–06) and then The CW (2006–08). The show centered around a group of women friends in Los Angeles: Joan Clayton (Tracee Ellis Ross), Maya Wilkes (Golden Brooks), Lynn Searcy (Persia White), and Toni Childs (Jill Marie Jones). Jones left after the sixth season.

The series ran for eight seasons until it was cancelled in early 2008, partly because of the writer's strike that year. Executive produced by, of all people, Kelsey Grammer.

Not to be confused with the 1978 film of the same title, the 2018 ITV drama series, or the manga Girl Friends.

Later spun off The Game (2006), and the show also shares a universe with Moesha and The Parkers.