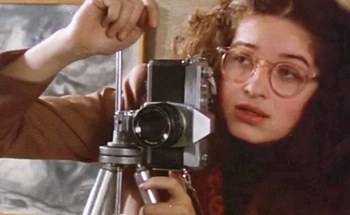 Girlfriends is a 1978 Dramedy directed by Claudia Weill, from a screenplay by Vicki Polon.

Susan Weinblatt (Melanie Mayron) is a young photographer in New York City. Struggling to find galleries that will display her artistic photos, she makes ends meet doing commercial photography. One of her main clients is friendly Rabbi Aaron Gold (Eli Wallach), who always hires her to photograph the bar mitzvahs and weddings he presides over.

Susan's best friend and roommate, aspiring writer Anne Munroe (Anita Skinner), suddenly announces that she's moving out to marry Martin (Bob Balaban). Susan struggles to keep their friendship afloat, as she juggles other friendships old and new, a romance with a man named Eric (Christopher Guest) she first met at a party, her first big break in her photography career, and even thoughts that Rabbi Gold (a married man three decades her senior) might be more than just a friend.

Produced over the span of a year on a shoestring budget, Girlfriends became a favorite on the then-embryonic film festival circuit, with Warner Bros. picking it up for distribution. While it didn't attract much of an audience in regular release, it impressed Stanley Kubrick, who touted it in an interview as the best recent film by an American director. Long considered an obscure curio, it's gained renewed attention in recent years as an early attempt by female filmmakers to touch on feminist themes, as well as an obvious ancestor of the Mumblecore movement. Lena Dunham has been an enthusiastic champion, and even brought in Weill to direct an episode of Girls.

No relation to the TV series or the manga.