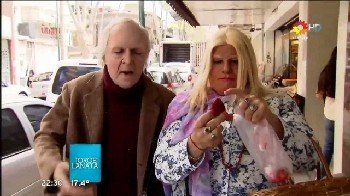 Vos no entende' nada, Pino, no entende', esto es culpa de los Kernell, los Kernell!
Casada con Pino is an Argentine series, with parodies of the politicians from Argentina. As Elisa "Lilita" Carrió and Fernando "Pino" Solanas made a political coalition for the 2013 elections, the main characters are Lilita and Pino, who appear Like an Old Married Couple. In the 2013 season they had their romance, got married, Lilita got pregnant, and eventually gave birth to their daughter, the "Republic".
Advertisement:

The 2014 season featured several more politicians: Cristina, Mauricio, Máximo, Michetti, Sanz, Larreta, etc. Lilita cheated Pino with Mauricio, so the Swedish nurse kidnapped the Republic: she thought that she had terrible parents, and that she must be taken to be raised in Sweden so it can become a world power. The police followed her, but she lost the baby, which was placed over a random truck. The baby fell from it afterwards, and was retrieved by Michetti (who had been brainwashed to support Cristina). Michetti took the Republic to Cristina's house, as Pino and Lilita tried to locate her. Eventually, Cobos told Lilita the location of the Republic, so they stole her from Cristina's house.

The name is a parody of the series Casados Con Hijos