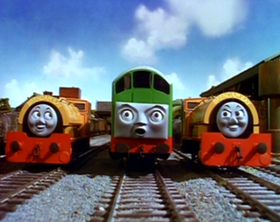 Bill and Ben are tank engine twins who work at a china clay quarry. Their jobs are to take the china clay in trucks along the main line for engines and ships at the Harbour.

One day, Bill and Ben arrange some trucks and leave to pick up more, but return to their first loads gone. Their drivers find a patch of oil on the ground and realize a diesel is responsible for taking the trucks. Mishearing this as "diseasel", the twins argue who is responsible stating that "coughs and sneezles spread diseasels". Their drivers, laughing, stop the twins from arguing and make a plan to get the trucks back which involves removing the twins' nameplates and making them identical.

The twins find the trucks in a yard, with a large green diesel at the front. Ben hides behind, with Bill going forward to demand the trucks back. The diesel claims the trucks are his and tries to shoo Bill away, but when Bill disappears Ben rides forward surprising the diesel, thinking it's the same engine. This continues for a while, causing the diesel to get dizzy. The twins then reveal themselves to him.

Edward arrives at the scene and asks Bill and Ben what they're doing there. They explain that the "dieseasel" stole their trucks, but Edward scolds them for their rudeness. The twins apologize and the diesel forgives them. He introduces himself as BoCo and explains that he got his trucks mixed up with Bill and Ben's. Edward then sends the twins to pick up BoCo's trucks in exchange for theirs.

After the two leave, Edward tells BoCo that Bill and Ben don't mean any harm but can be maddening at times. BoCo laughs and replies that "maddening" is the word.