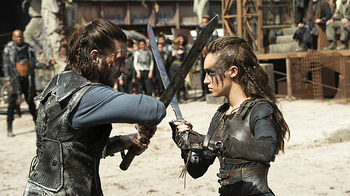 In Polis, Nia is brought in in chains. She has confessed to the destruction of Mount Weather. Nia wants to have the throne and asks the ambassadors to vote for her. They all vote except for Clarke which means it isn't unanimous. Queen Nia of Ice Nation challenges Lexa to fight to the death for the right to the throne in which she has to oppose Nia’s son, Roan. Clarke is worried for Lexa but Lexa says that nobody fights for her.

In Arkadia, Pike says that they can't trust any grounders after the attack although Kane says the real attack was against Lexa, not them. Abby says they will hold the election tomorrow and they can deal with Pike then. Bellamy and Kane talk and Bellamy is upset that 49 people died, including Gina that he was supposed to protect. Kane say he did his best but Bellamy says he failed. Jasper refuses to attend the Mount Weather memorial and sneaks out of camp. Monty follows him.

In Polis, Lexa is teaching Aden how to fight. Titus and Clarke haven't managed to talk her out of fighting yet. Lexa introduces Aden as the most promising nighblood and Aden pledges his allegiance to the thirteenth clan. Clarke tries to convince Lexa not to fight but Lexa says that if she does die, her spirit will choose wisely.

In the Ice Nation, Roan practices fighting with Nia but remains angry and insists he doesn't need her help. Nia says that when he wins, he won't be banished but Roan is cross with her and says that none of it is for him. He leaves and Clarke approaches him in secret. She says she wants him to be king and she wants to kill Nia. Roan says he can help.

In Arkadia, the memorial takes place. Bryan sits down after speaking for Iris and Bellamy goes up and speaks about Gina. Pike publicly confronts Kane and Abby, questioning them about the Grounders in Arkadia and the army outside. Lincoln gets injured by one of Pike's men and Abby checks if he is okay. Lincoln goes outside and is upset but says that if you get knocked down, you get back up again to himself. Monty and Jasper are outside and Monty tells Jasper that he has had enough. Jasper ignores him and Monty sees in Jasper's pack that he has Finn's ashes with him.

In the Ice Nation, Clarke visits Nia and says that she has changed her vote. Nia is impressed and says that Clarke is thinking like a leader. Nia says she will protect the sky people as she dislikes Lexa, not them. Clarke makes a blood oath and nearly poisons Nia with the knife, but Ontari notices. Nia cuts Ontari's hand and drips Ontari's blood, which is black onto Clarke's face. In Polis, Lexe explains that black bloods is from nightbloods. All nightbloods should have been taken to Polis to be trained. Titus tried to convince Lexa to choose a champion but she still refuses.

Back at Polis, the battle between Lexa and Roan begins. Although Roan nearly impales Lexa, she rolls out of the way and holds a spear to him. Roan tells her to end it. Nia calls from the crowd that if he dies, he dies a coward not a prince. Instead of killing Roan, Lexa throws the sword and murders Nia. She shouts that the queen is dead, long live the king. Roan has become the new Ice Nation king.

Whilst Bellamy is helping Pike steal guns to murder the whole Grounder, Lincoln tries to stop them. Pike says if he wants to prove he is one of them, he must let them pass. Somebody says that Pike should run for chancellor and somebody starts chanting Pike's name. Bellamy joins in with Pike's chant whilst Abby and Kane exchange worried glances. Jasper wakes up, hungover, and asks Monty how he could kill Maya as she was his friend. Monty says he didn't have a choice but Jasper laughs. Monty gets angry and Jasper trips over spilling Finn's ashes.

In Polis, Lexa comes into Clarke's room. Clarke changes Lexa' bandages and asks what will happen to Ontari. Lexa says she will be at the conclave when Lexa dies. Clarke asks why Lexa still trusts the ambassadors after they betrayed her but Lexa argues that they were doing what was best for their people.

In Arkadia, Kane reveals that Pike is the new Chancellor. Pike then pardons himself and his supporters. He rejects their status as the thirteenth clan and says to Bellamy that they must finish what they started. They leave with guns to murder the grounder army. Kane says to Bellamy that it isn't too late to pick the right side, but Bellamy says he already has.