Japanese Title: Goodbye Mijumaru!? The Path to Being Hotachi King! 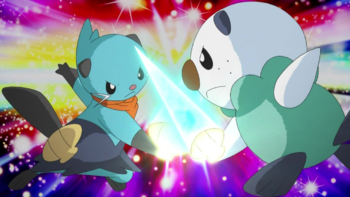 He has two of them! And they're both bigger! Oshawott should've known he wasn't going to be able to compete with that.

On Scalchop Island, Ash's Oshawott competes with other Oshawott and Dewott to see who is the best user of the scalchop. The Golden Scalchop that is one of the prizes attracts Team Rocket's attention. But Osharina, a female Oshawott who is the Scalchop Queen, is the prize Oshawott is most interested in.