Recap / Charmed S3E19 The Demon Who Came In From The Cold

The Demon Who Came in From the Cold

The sisters and Leo count on Cole to help them when he goes undercover in the Brotherhood of demons but can he be trusted? 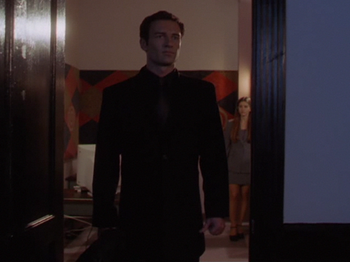 The sisters and Leo are at P3, deciding which movie they want to see, when Cole walks in. Phoebe is glad to see him. Cole joins the others for a moment, but then leaves with Phoebe, leaving Leo, Piper and Prue to see their movie.

Cole and Phoebe walk down the street. Phoebe was hoping Cole would be there for her graduation party. Cole is tired of being on the run, and asks Phoebe if there's some way to permanently strip his powers, so he'll no longer have the temptation to use them. Phoebe is thrilled. Suddenly, a street prophet starts yelling about "The Brotherhood". A demon grabs the prophet and pulls him into the alley. Phoebe chases them down, and finds the prophet already dead at the demon's hand. Phoebe surprises the demon; after a brief struggle, she kills him with his own knife. Cole tells Phoebe that the demon was his "brother".

Back at the manor, Phoebe isn't happy that Cole didn't tell her about his "brother". Just then, Prue, Piper and Leo come home; Phoebe paged them. Leo tells the others of the Brotherhood of the Thorn, an elite society of upper-level demons of which Cole/Belthazor was once a member. Cole says that the street prophet was a magical seer, who, apparently, had a premonition of the Brotherhood's next move. Phoebe remembers the prophet was ranting about Luxirom, a large ISP. Cole proposes to go undercover among the Brotherhood.

In a downtown skyscraper, three members of the Brotherhood—Vornac, Tarkin and Klea are worried about their brother, Trigg. He was the demon sent to kill the street prophet, and he hasn't reported back. They don't know that Phoebe killed him earlier. Vornac tells Klea to find him.

Piper and Leo don't like the idea of Cole going undercover, fearing his "brothers" could turn him evil again. Prue doesn't like it either, but in her view, only Phoebe and Cole's votes count—and Cole's already volunteered to go in. She does think, however, that they need another plan. Phoebe is making the power-stripping potion, and tries one last time to talk Cole out of going. Cole, however, promises not to do anything evil. To reassure her, he promises to meet with her at the mausoleum in two hours, as it's the "second-safest place" he knows. The safest place is with Phoebe.

Cole shimmers to the Brotherhood, who of course, are unwilling to take him back. Just as they are about to kill him, Cole shows them the head of the street prophet. They are still suspicious, as they haven't heard from Triggs. Cole, however, thinks that his brothers and sister are getting sloppy. Tarkin mentions that the Brotherhood's leader, Raynor, is not pleased with Cole, especially since Cole vanquished the Triad. Cole claims he killed them because they were planning a coup against the Source. The Brotherhood answers directly to The Source, and Cole claims that if the Triad's coup had been successful, they would have killed everyone in the Source's inner circle. He said he didn't warn the Brotherhood because he had no way of proving it. Vornac still doesn't believe Cole, and sends Klea to check his story. Tarkin tells Cole that he's glad to see him back; Tarkin and Cole were very close in the old days.

Cole hasn't been able to check in with Phoebe as promised since the Brotherhood is keeping a very close watch on him. Piper suggests that Leo orb to the mausoleum to find out if there's been any word, but Leo wants to stay until they can get a read on what the Brotherhood is planning. Prue remembers that the prophet had mentioned an Internet provider called Luxirom. This company is mentioned in the newspaper as being involved in a merger with another Internet company, Meta Satellite. If the merger goes through, virtually all of the world's Internet traffic will be controlled by one company. However, talks faltered over the weekend because Luxirom's CEO, Frank Pirelli, is having second thoughts.

Leo orbs to check on Phoebe and Cole, at last, shimmers in. He has to get back quickly to avert suspicion, but does tell them the Brotherhood plans to kill someone at 8 am. Leo says they already know it's Frank Pirelli. Cole tells them the Brotherhood wants the deal to go through, and has taken over an investment bank, which is raising money for it. To Leo, the solution is obvious; they have to protect Pirelli, until the merger vote at 11 am the next morning. Cole, however, is afraid the sisters might blow his cover. Phoebe assures Cole they'll protect both him and Pirelli. Cole shimmers back to the Brotherhood, but takes Phoebe's water bottle with him to provide an alibi. He returns just as the Brotherhood is finalizing its plan to kill Pirelli so the merger will go through. They decide to let Cole do the killing, to prove his loyalty.

The next day, Klea reports that she can't prove Cole's story, but Vornac says that they're about to see if he really is telling the truth. The sisters and Leo hide nearby. A car driven by one of the Brotherhood's minions cuts off Pirelli's limo. Pirelli's chauffeur comes out, yelling at the demon. In the midst of the distraction, Cole throws an energy ball, but Piper freezes the scene and Leo orbs Pirelli out. Phoebe slips a note into Cole's pocket asking him to meet her at the mausoleum as soon as he can. The scene unfreezes and the limo explodes, but Pirelli is no longer there. Vornac tells Klea to get Pirelli's corpse. Cole doesn't think there will be much left, but Vornac wants to make sure no one will get suspicious and much to Cole's surprise, glamours into Pirelli. Klea can't find Pirelli's body.

The sisters hide Pirelli in the manor basement, and Phoebe slipped him a sleeping potion. Much to their surprise, they find "Pirelli" announcing that he now supports the merger. Piper is suspicious, but Prue and Phoebe think that Cole didn't know either. Prue wants to come up with another plan, but Phoebe wants to warn Cole, since anything they do might blow his cover. She tells them about the note, and heads for the mausoleum to wait for Cole. Prue reveals she has saved a bit of Belthazor's flesh ('"Power Outage") in the freezer. She thinks that, since the Brotherhood swore a blood oath, the vanquishing potion they intended for Belthazor should work on the rest of the Brotherhood as well.

Vornac and Klea are still suspicious of Cole, as they found no trace of Pirelli's body. Klea suspects that witches intervened, and Cole agrees. He also thinks there might be a leak. Vornac and Klea think Cole is the leak, but Cole claims he wouldn't dare betray them after returning the day before. Vornac says that he's bothered by "rumors" that he fell in love with a witch, and it's a strange coincidence that witches are threatening their whole operation. Cole admits his human half fell in love with a witch, but he'd forgotten his true nature. Klea thinks Raynor will demand Belthazor's head, but Cole says he can bring back the real Pirelli.

Cole shimmers to the mausoleum and finds Phoebe waiting. Phoebe tells him where they have Pirelli, and that they intend to vanquish his demonic double before the vote. Cole warns Phoebe that it's too risky, and wants the sisters to stay put until they hear from him. Phoebe is concerned about Cole's sudden change in attitude. A pair of glowing eyes watches in the distance, it's Klea. Unknown to Cole, Vornac ordered Klea to follow him to the mausoleum and kill him on the spot if he betrayed them. Three of the Brotherhood's minions attack at the manor. One throws an energy ball, but Prue deflects it back at him and vanquishes him. The two others continue the attack, but Piper freezes them, and she and Prue finish them off with the Belthazor potion. The sisters go to the basement, and find Cole and Tarkin shimmering away with Pirelli. Phoebe is surprised to learn that Prue still had part of Belthazor's flesh, but Prue admits that she didn't trust Cole, until recently. Piper suspects that the Brotherhood might have turned Cole, but Phoebe thinks there's a method to his madness. She also doesn't think it's a good idea to go after whoever is posing as Pirelli. However, Prue tells her she's been outvoted, three to one (Prue, Piper and Leo being in favor of going after the double).

Vornac is angry at the loss of the three demons, and suspects another tip-off by Cole. Klea thinks that Cole might have been speaking in code to Phoebe. Cole assures them he has Pirelli, but won't reveal where he has him until he's sure they won't kill him. Tarkin backs him up. Vornac gets ready to head for the merger vote. However, Cole warns Vornac that the sisters might try to vanquish him. Vornac cryptically asks if they're willing to vanquish Cole.

At a nearby skyscraper, Prue blows open the board room door and the sisters storm in, potions at the ready. However, they find only Cole. Prue asks "Cole" where Pirelli's demonic double is, but "Cole" says that he thinks the Brotherhood is on to them. Prue and Piper demand to know where he took Pirelli, but "Cole" says only that he's safe. Phoebe says that they agreed to take Pirelli to the mausoleum, the safest place Cole knows. When "Cole" confirms this, Phoebe throws her potion and vanquishes him. "Cole" turns out to be Vornac in a glamour. Phoebe says she knew "Cole" was an impostor since he told her the safest place he knows is with her. The real Cole shimmers in and explains that he had to make everyone, even the sisters, think he'd turned. Otherwise, the Brotherhood would have killed him. Unknown to everyone, Klea is spying on them.

Cole reports that when he found out the sisters killed Vornac, he went after Pirelli but couldn't find him. Tarkin says that Cole has to give a full account to Raynor. Cole demurs, saying he needs to clear his name before the Source. As Cole leaves, Raynor shimmers in with Klea and blasts Cole in the back with an energy ball, knocking him unconscious.

At P3, Phoebe's graduation party is well underway. However, Phoebe can't enjoy it because she's very worried about Cole.