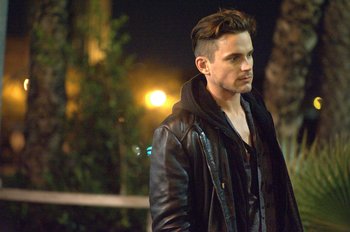 Alex is pushed to her breaking point as Scarlett stirs up memories of Holden. Donovan is targeted by a dangerous rival of the Countess.

Tristan emerges from the elevator to jazz playing on a phonograph. He looks for James March, "the greatest serial killer that's ever lived", whom he has "Googled". March introduces his new fan to the "Black Closet", a slow-death chamber of neglect. There are other such places, which James wants Tristan to re-open.

Will Drake leads Claudia Bankson and Lachlan on a tour of the 7th floor (which should be unoccupied), and they encounter Tristan in March's suite. Will declares Tristan a squatter, and demands that he leave, but notes that the cut from Tristan's face is gone. When the tour party leaves, March and Miss Evers muse over where they are going to live once the floor is gutted and renovated. Tristan says he'll take care of it.

Young Ellison's measles have intensified to add pneumonia and 103+ degree fever. Alex Lowe transports him to the hospital while musing on her unhappy childhood as a reason for choosing her career as a pediatrician. She recalls how she felt whole when Holden was born, and never bonded as completely with Scarlett nor loved her husband as much. She became accustomed to the grief until she unsuccessfully attempted suicide, saved by John who pulled her, wrists bloodied, from a tub.

The Lowes have a therapeutic session with their family counselor. John inquires about Scarlett's unbelievable story, and she describes again her encounter with Holden at the hotel. She mentions that he smelled of lavender, which lights a spark of hope in her mother.

Claudia is brokering a deal for a photo shoot, and her cellular reception breaks up when she enters her room. She bathes, and distracting noises and peripheral sights abound. She lays down to sleep, and Gabriel bursts from the mattress beneath her to strangle and ultimately stab her with the ice-pick she intended for self-defense.

John and Adam investigate a manufactured journalism murder where the reporters "bore false witness", and had tongues removed or nailed to desks. John returns to the hotel to stumble upon bloody Gabriel in the lobby wanting help.

Tristan picked the lock on Will's room and surprised him. Tristan apologizes for his behavior at the fashion show and says he's drug free now. They ruminate upon growing older. Will is reviewing the hotel blueprints and notes that they bear little resemblance to the reality of the building. Tristan attempts seduction as a distraction, and is about to fatally stab Will when he notes Elizabeth watching and shaking her head in disapproval.

John, who collided with a bloody and raving Gabriel upon his return to the hotel, has taken him to the emergency room at St Vincent's, but after naming Sally responsible, the junkie dies. John tracks down Claudia's room and finds it being prepared by Miss Evers. He encounters Sally, who rebuffs his questions about Gabriel. She offhandedly mentions the "Ten Commandments", and she clarifies the difference between killing and murder. He handcuffs her and says she's under arrest. In the elevator she says they are both starving and tries her own hand at seduction. The lights flicker, and the Addiction Demon phases in and out with them until at the lobby John finds himself alone.

Iris has researched where she and Donovan will move on to, but he will have none of it. He insists that he hates her and that she's self serving. He resents that Iris kicked out his father, and they've never gotten along since. He has a list of grievances (which are his reasons for using drugs), and she counters with her own (and wanting desperately to save him). He resolves to leave that night without her. She says she doesn't know who she is without him as his mother, and he says if that's true that she should kill herself.

He feeds on a homeless addict and then comes upon a woman he intends to knife, who appears to have car trouble. She tasers him in response.

Alex has been trying to reach John, and catches up to him in the hotel bar. Alex suggests he have a real drink and notes that he's not actually an alcoholic. She also presents him with divorce papers. She wants to move apart for Scarlett's sake. Alex is actually quite content without him, and nearly leaves John sobbing. He says that something is wrong with him, and that he thinks he's seeing impossible things.

Elizabeth pours Will a glass of wine. He questions her motives and reminds her, unnecessarily, that he's gay. She says that she plans something more intimate. He admits that he's out of creative ideas, and thinks she's speaking metaphorically about him "dying". He is intoxicated with her, and she nearly is successful in seducing him when Tristan intervenes. Tristan questions her motives, and she admits that she invested badly in Bernie Madoff's pyramid scheme and lost everything. She plans to marry Will and bleed him of money, after which he will be allowed to die.

Alex finds John's obsession with the Ten Commandments Killer (and subsequent sleepless nights) dangerous. He apologizes for his failings as a husband and father, and she says it's not his fault. They kiss and he spoils the mood by suggesting they make another baby. Repulsed, she refers to the divorce papers and leaves.

She finds a bloody Claudia and then Holden in the hallway, who recognizes his "mommy" and addresses her.

Sally prepares a fatal "fix" for Iris, who is ready to end it. She is resigned to her son's hate of her, and she can't think of any more reasons to live. Sally demands clarification that Iris has no unfinished business and isn't going to be haunting the hallways with her, and Iris agrees.

Ramona dialyzes Donovan, and he wonders who she is. She responds that she was a blaxploitation actress and wanted more than B-movies. 1977 saw her denied roles due to her race, and she was saved from a would-be casting couch by Elizabeth, who seduced and turned her. Years spent together ended in 1997, when Ramona turned to the beautiful aspiring rapper Prophet Moses, with whom she'd become infatuated. Elizabeth responded by eating all his staff and blowing his brains out. Ramona plans revenge by killing the towheads. Ramona wants access that she thinks Donovan can provide, and he tells her that Elizabeth dumped him the prior week. She cuts his bonds and lets him go.

Donovan, who is upset at his lack of prospects or direction, is greeted by Liz upon entering the bar. Liz scolds him for his abuse of Iris and his ignorance of his luck.

Sally doesn't understand why Iris is still alive, having injected enough heroin to take down a horse. Sally tries a plan B by tying a plastic bag over her head. Sally awaits her demise, but is interrupted by the arrival of Donovan, who at the sight of his dying mother, slits his wrist and revives her. Sally is amused by the twisted poetic justice.