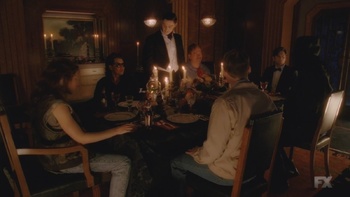 Richard Ramirez has a standing reservation for Devil's Night, as he died in 2013. He's attending festivities at the master's behest, and laments that Charles Manson won't be joining them yet. Liz checks him in, but he won't need a key.

His swag package involves a husband and wife, whom he bludgeons. The wife does not die, despite repeated attempts to kill her, and she runs screaming from the room, where she encounters March. Her pleas for help prompt him to hold her and invite his compatriot to finish her off.

John answers a phone call from Scarlett. She doesn't want to go trick-or-treating this year, and wants to stay with her grandmother rather than have him pick her up. During the call, he notices his ceiling and wall are bleeding.

Miss Evers is having trouble getting out a difficult bloodstain as well.

In 1925, Young Albert doesn't like his ghost costume (and would have preferred an African cheetah costume) that his mother, Miss Hazel Evers, made.

Every Halloween, she is reminded of her kidnapped son. John arrives to question the blood coming from her room, and they commiserate over a sherry (he won't drink) over stolen children. She explains that her son was taken to a ranch outside town, and all they found was the costume. His kidnapped had taken and killed many children and disposed of their bodies with quick lime and set them in a mass grave. After the recounting, her mood upswings as she blathers on about preparations for the festivities.

Alex has brought Holden home, but the family dog (Jasper) rejects him. Holden objects to the bright light while she examines him (finding a body temperature of 75.5 degrees). He says he's not cold, but he is thirsty. She goes to the kitchen for a hastily spilled glass of juice, and pours two glasses (orange and apple). She returns to find his drink of choice is Jasper. He doesn't feel well, and wants his other mommy.

John discovers the Wineville murders that Evers mentioned took place 85 years prior, and that they changed the name of the town.

Under Liz's watchful eye, Alex returns with Holden to the Hotel, and the boy scampers to his coffin. Elizabeth appears and says that she has answers to Alex's questions.

Elizabeth explains (in the penthouse) that she saves children from neglect. Alex protests, but Elizabeth was referring to John's neglect as she walked Holden away from the carousel herself. She goes on to explain the viral infection. Alex holds her at gunpoint, wanting a cure. Elizabeth wants undying loyalty in exchange for passing on the virus to Alex. Alex goes to run, but she's slowed by Tristan (who is curious if she's "banging her too").

John heads to the Liz-tended bar for a ginger ale. John expounds that he was never an alcoholic, just a control freak. He'll surrender to the illusion of control and have a double martini. Aileen enters for her 13th Devil's Night, and John buys the familiar woman a drink. Liz mentions that John is a special guest of the hotel and a cop. After saying she's a serial killer, he thinks she's got a great Aileen Wuornos costume. He thinks she's speaking in character when she justifies her murders, and he calls her justifications bullshit. She says he hasn't lived until he's had a roll with a batshit crazy hooker, and he offers his room (over Liz's warning).

While tied to a chair, he slowly realizes what Devil's Night at the Hotel Cortez involves, and they fight until he handcuffs her in the bathroom and finds her (true) Driver's License. He returns to the guestbook and finds plenty of serial killers have signed in. Liz describes March's annual tradition and discovers John himself is on the invitation list for dinner. His room is missing Aileen, but a garment bag is laid on his bed with a card "Knock 'em dead tonight - Liz".

Wearing the tux found inside, John arrives at Room 78 for dinner. Aileen apologizes for her behavior and wants him to sit with her, but March reminds her of the placard traditions. He serves absinthe and introduces himself. John reminds him that March would have died 85 years prior. March counter-reminds him that anything is possible in this hotel. John Wayne Gacy and Jeffrey Dahmer introduce themselves, and John recognizes the masked Zodiac, Aileen, and Richard Ramirez on his own. Despite being dead, they all have received guidance from March and had all stayed in the hotel. The absinthe has taken an effect on Lowe, and Gacy handcuffs him to his chair.

Evers serves, and Ramirez puts on some music ("Sweet Jane", which he and Aileen dance to) . Evers brings out an appetizer, a drugged young man. Lowe tries to shoot Dahmer to (unsuccessfully) prevent him from trepanning the young man, not knowing that the shot will have no effect on ghosts.

Sally muses with a suited man about the fate of Halloween teens walking past. He wants whatever she's providing in the way of fun.

Dahmer has "zombified" his victim, and the assembled killers are disappointed that John hasn't warmed to them yet. March toasts his famous equals, and he wants them to join him for dessert. Sally brings in her now heroin-tainted man, which will buy her a year of solitude from March. The killers (Gacy now in clown make-up) all take turns stabbing the man. Sally sees the distressed Lowe, and tells him he's hallucinating from the alcohol / absinthe combination. The nights festivities are absent in the dark and otherwise vacant room. She walks him away so that the others can enjoy themselves, though March is wary.

Elizabeth prepares for Alex's turning, and they kiss on Elizabeth's bed. Alex suckles from Elizabeth's sliced breast, and then falls asleep for her last mortal rest.