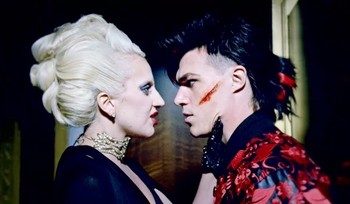 Sally smokes by the window before returning to her task: sewing Gabriel inside the mattress. He protests her lie about setting him free but she chastises him for thinking he could cheat death and tearfully kisses him goodbye. She then pushes his head beneath the mattress. She's interrupted by cries of help coming through the air ducts. She goes to the prison room to complain and finds the children feeding on the wrists of Agnetha. They balk at the taste of her blood and Iris pronounces her dead.

Liz wheels the body of Vendela to a garbage chute as Miss Evers, the maid removes the bloody sheet. She is sent sliding down to a basement room to join the bodies of her roommate, Agnetha and the decrepit man they found in the mattress.

In the game room, the children recieve dialysis and their cleaned blood goes through to a decanter. Elizabeth takes the blood, pouring it into champagne glasses; one for her and one for Donovan. She wants to go to an art opening to hunt but he wants to stay in. Elizabeth goes alone.

Max Ellison, a patient of Alex is showing worrying symptoms of the measles. She scolds his anti-vaccination mother and says that he could die over the next few weeks.

John awakens in Room 64 and shortly hears a knock at the door. It's Miss Evers who is offering a turn down. John declines and he briefly sees a glimpse of the Addiction Demon. He washes his face in the bathroom and thinks he hears something in the shower. He pulls the curtain back to find a couple having sex. He then wakes up from his dream. He hears a giggle from outside and sees Holden. He begins chasing him down the hallways. Sally begins talking to him on the balcony bar whilst Liz pours him a Ginger ale.

Sally talks about her life of poetry and track marks and claims she wrote a song with Patti Smith. She describes the endless ladder of diminishing returns from chemical highs. Sally inquires about John's last drink. He describes it as starting like every other day. He investigated a family murder, the father seemingly poisoning his wife and children before killing himself. It turned out that the family had died through carbon monoxide poisoning and he killed himself out of grief. John followed the investigation with a vacation where his son, Holden went missing. John explains that he stays sober because 'he can't afford to get lost'.

The Bel Air victims receive texts from a third party, spoofed to seem like they're from each other. John receives a strange package too, one being from the Hotel Cortez. Initially thought to be a bomb, it's actually an 'Oscar' used as a previous murder weapon.

Claudia Benson visits Will at the hotel whilst Liz teaches the people from Vogue how to 'vogue'. Claudia is intrigued by John who meets his daughter, Scarlett in the party-filled lobby. John thinks the fashion show is inappropriate for Scarlett until Will introduces her to Lachlan. Sally makes a scene about not being on the party guest list but takes special note of Scarlett. Elizabeth and Donovan make a grand entrance at the show's front row. Tristan Duffy, an attractive male model, takes a snort of coke in the green room before appearing to seduce the crowd. Elizabeth watches, taking his attention and smelling his rage. Will watches angrily as Tristan slices his face with a razor to bring his modelling career to an abrupt end.

Lachlan leads Scarlett through a hidden passage where the strange children sleep in glass coffins. He says that nothing will wake them but Holden notes the presence of his sister.

Tristan breaks his way into the hotel's penthouse to find cocaine. Donovan intervenes but is stopped from eating him by Elizabeth. Tristan takes the opportunity to escape in the elevator and finds it stops on the 7th floor. He gets out, hearing jazz music and eats abandoned room service food; finding it maggoty after one mouthful. Journeying further into the room, Tristan encounters James March, who notes Tristan's vices. A whistle from March summons Miss Evers with a bound prostitute in tow. March asks Tristan to shoot her but kills her himself when Tristan declines. Tristan runs until he's captured by Elizabeth.

Scarlett catches a bus to the hotel, passing through the lobby being cleaned. She returns to the coffin room to find it empty. She follows video game noises until she reaches the playroom. Holden asks her what took her so long. Scarlett asks her if he remembers her to which he replies that she's his sister. She shows him pictures of the family and asks why he hasn't aged. She offers to take him home, which he replies saying that he is at home. He then scares her using super speed when she tries to take a photo causing Scarlett to run out. She bumps into Sally in the hallway, terrifying her further with her bloody mouth. She returns home to find the house swarming with police, discovering she herself was the subject of a manhunt. She escaped her police protection to confirm Holden's presence in the hotel. Alex is flooded with grief whilst John is angry, exclaiming that Holden is dead. Scarlett attempts to prove her case with the photo but Holden is a complete blur.

Back at the hotel, Tristan revels in his new state. Elizabeth explains the rules: unaging but not invulnerable, avoid energy sapping sun or dead or diseased blood; don't get caught and don't fall in love. Elizabeth tells him that she was born in 1904, turned by a beautiful man. She enjoys the decadence of each decade but the disco era is her favourite of all. Donovan enters, saying Tristan won't last a week. He can't believe that she's turned Tristan and that she's abandoning him. Elizabeth admits that's exactly what she's doing, that Donovan is to pack to leave and that she lives for the heartbreak.

John invades Iris's space behind the check-in desk, angry that Scarlett was roaming the hotel. He handcuffs her, asking for answers to the secrets in the hotel. She replies saying all he needs to do is ask nice and buy a lady a drink. Liz pours the pair a drink as Iris starts with the story of James March and his hotel, a monument to his sadism. John questions the secret passages in the blueprints which leads to a discussion in his office. Iris explains that the hotel is a trap, designed to ensnare victims with no sounds or escape. At least three people per week met their end at his hands. Miss Evers was one of his contemporaries and she loved him loyally. His hatred for religion led March to a desire to kill God to send a message to the world.

Mutilated bodies were found along with a monogrammed handkerchief, which led the police to the hotel doorstep. March offered Miss Evers the choice of who was to die first. She chose herself, via the gun so long as he did her the honour of being his last victim. He did so and then sliced his own throat before the police arrived.

John applauds Iris's story, disbelieving the supernatural elements. She mentions that Room 64 was March's office, the black heart of the hotel. John pieces together clues, including the 'Oscar' as a confirmed murder weapon.

In the lobby, Tristan arranges a meeting with a gay hooker through his phone. After a messy make out session in the elevator and up to the bedroom, Elizabeth enters and approves Tristan's choice. The man is turned off by the female presence but they put an end to his objections quickly. Tristan stabs him in the neck, drinking his blood. He turns to Elizabeth insisting that because he's sucking on a guy, it doesn't make him gay. He then proves it by having sex with her above the man's corpse.