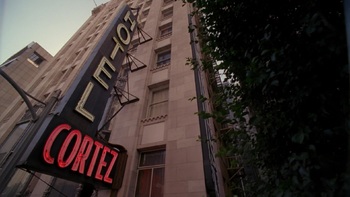 Detective and family man, John Lowe investigates a series of gruesome murders in Los Angeles. A mysterious tip points him to the Hotel Cortez.

On the street in front of the Hotel Cortez, a taxi driver delivers two Scandinavian tourists named Agnetha and Vendela. They make their way to the check-in counter through the eerily quiet lobby. Iris greets them but they are unimpressed. Short on money, Iris refuses to give the girls a refund when they realise the hotel is further away from where they want to visit than they thought. Iris guides the women to their room, noting that there is no wifi and that the building is a 'dead zone'.

Vendela goes to get ice and encounters a maid steaming a blood covered sheet. She also meets pointing children who herd her through hallways and disorientate her. As she scoops ice into a bucket, a metallic clawed hand reaches for her shoulder. It disappears as she turns back. Returning to the room, Vendela finds Agnetha lighting candles as the room reeks of decomposition. A call to Iris proves useless as she refuses to allow them to change rooms. The girls investigate and find the mattress has been stitched together jaggedly through the middle. They cut through the middle and initially find nothing until a nude, gholish man bursts through it.

The girls question Iris about the man's identity. She claims ignorance and promises they won't be charged for the room. As she ushers them to another room to await a police interview and warns them that they will be arrested for evasion if they leave. Iris leaves the girls in Room 64 which they 'never rent out'. Many hours later, Vendela awakens to find Agnetha missing. She finds two children she saw earlier in the bathroom, feeding on Agnetha's body in the bathroom.

John Lowe investigates a particularly gruesome murder in a different hotel. A woman was fatally impaled through the chest and her hands are nailed to the headboard. Her lover is still alive, his eyes and tongue have been cut out and he's been super-glued inside of the dead woman. Lowe returns to his office to research more gruesome crimes from the local area, including a man who was anally assaulted with a weapon that left gold paint chips behind. He's interrupted by a video call from his daughter, Scarlett for her nightly bedtime story. He receives a call later from a disgruntled voice; he claims to know inside information about the murder and directs him to the Hotel Cortez before he kills again.

Gabriel wants a room and is checked into Room 64 by Iris. As he heads upstairs, Sally claims 'dibs' on him as she hasn't seen anything sweet in a while. When he reaches the room, Gabriel shoots up heroin. He sees the maid and a formless figure who then bends him over and impales him anally with a sharp spike.

Lowe arrives to investigate Room 64 and Iris asks Liz Taylor, transvestite bartender to show him to the room. Meanwhile, Sally watches Gabriel's rape and speaks to him. She tells him to tell her that he loves her. He does so and dies. Sally smokes as the rapist vanishes.

Liz and Lowe breeze through the hallways towards Room 64. Lowe opens the door to find the room clean and empty, despite the events that just happened. He falls asleep on the bed as Gabriel appears to wake up underneath.

When Lowe wakes up, one of the strange children is in the room. He chases him and gets lost in the hallways. He calls the name Holden, seemingly recognising the child.

Lowe returns home to his family. His wife, Alex is a paediatrician and is annoyed by his late return as she is now late for a number of house calls. She has prepared dinner but Lowe and his daughter, Scarlett decide to go for sushi instead.

Iris brings in a 'cleanser' for the two tourists who are currently caged in neon lit iron maidens. She has prepared meals of liver and other blended organs and attempts to force feed the girls through tubes. Sally interrupts her and asks her to give the girls some compassion. They argue about the care of the guests and Iris' motives for staying at the hotel. Iris blames Sally for her own suffering and hands the girls to her care, where she leaves to feed 'the thing in Room 33'. Sally explains that the room used to be a theatre before unlocking Vendela's cage and commanding her to run. Iris begins chasing her through the lobby. Just as she reaches the door, Elizabeth appears. She stoically slashes Vendela's throat, blood pouring across the floor. She instructs Iris that such an incident should never happen again.

Lowe's daughter, Scarlett starts talking about dreaming of her brother, Holden. Lowe looks uncomfortable at the topic of conversation. He gets a text from Alex which leads them to a dark house. A police officer waits outside the house and Lowe asks him to watch over Scarlett. The caller who phoned Lowe earlier rings again, restating that he will kill once more. The cop leaves his post to investigate noises coming from some trees. Scarlett leaves the patrol car and goes into the house where she finds two men disembowelled and suspended above a bed. Lowe, who is chasing a dark figure in the house, gives up to find where Scarlett is.

The audience learns that in 2010, John Lowe and his family were on the Santa Monica Pier. He turns his back on his son, Holden for a second. As the child rode the carousel, he disappeared.

At the Hotel Cortez, Marcy (the realtor from Murder House) greets Will Drake and his son, Lachlan. They are doing a walk-through for the sale of the hotel while Iris is ignorant. They tour the penthouse to find it's still occupied by Donovan. Elizabeth is familiar with Will's fashion work and is far more welcoming to their new neighbour. She sends Donovan to show Will a statue whilst Elizabeth guides Lachlan to a room where the strange children play video games and eat candy.

Iris is upset about the sale of the hotel and we see that she followed her son, Donovan and Sally back there in 1994. Liz Taylor is manning the desk and is unwelcoming without any cash. Upstairs, Donovan is shooting up heroin with a contaminated needle provided by Sally. Iris beats on the door whilst Donovan lies unconcious until Sally lets her in. Sally fumbles through the hallways before being pushed out of the window by Iris. Afterward, Iris returns to Room 64 to find Elizabeth stroking Donovan's corpse.