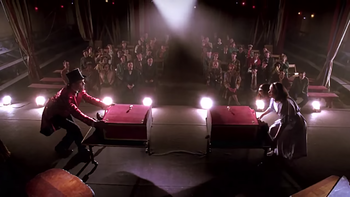 Two days ago, Stanley offered a proposal to Jimmy: his contact would be willing to pay for memorabilia connected to the freak show, namely Jimmy's left hand. Jimmy refuses, even when Stanley brings up Meep's fate. Stanley offers Jimmy a bottle to drink, and that he will take care of the rest. Moments later, Stanley brings a vomiting Jimmy to a guards attention, where Jimmy is whisked away to a Thor driven ambulance. Jimmy awakes from a sleeping gas to see a nurse in the county hospital. He asks for something for the pain, but she declines, since her friend was at the ill fated Tupperware party. To his horror, Jimmy discovers both of his hands have been removed after all.

The twins have settled into life with the Freak Show, and even Dot is content. They turn themselves over to hedonism, including an aborted dalliance with Toulouse. They burn their diaries, as they have no more need for secrets. They encounter Normandy-veteran and chameleon salesman Chester Creb in the main tent. He heard of the show's reputation and had to come see it. He is an amateur magician as well, and the girls agree he may be the one for them. He mentions that he has a plate in his head from a war injury.

Dell visits Jimmy, and finds him with missing hands. Dell implored Jimmy not to trust him, and Jimmy is resolute that he wasn't duped, despite the evidence. Jimmy asks politely for Dell's help eating his dinner, while Dell muses about prosthetic hands. Jimmy wonders if Elsa will sell him the show, and Dell offers to go in with him on it. Jimmy asks why Dell doesn't have the family lobster claws. Dell describes how he was the black sheep of the family, a freak for being normal; he ran the first time he saw Jimmy.

Chester demonstrates his act for Elsa, but she will have none. Sheepishly, he puts away his rings, but brings out Marjorie, his ventriloquist dummy. Elsa is charmed, but insists there are no openings. He wants to continue his chameleon sales. After presenting some sales figures, Elsa recognizes his accounting talents. She offers him a place warming up the crowd in exchange. He is overjoyed at a place to call home.

In the main tent, he speaks to Marjorie as he gets ready, and she is indignant at not being billed in the act. Paul walks in, unsure how to interpret Chester's actions. After he leaves, Marjorie giggles.

Eve and Suzi help Elsa pack. Dell is looking for Stanley, and tells them what Stanley did. Elsa demands that Dell get him out. Eve follows Dell out, wanting to help.

Chester visits the twins to thank them for vouching for him. He brings them a music box as a gift, feature twin ballerinas. He tells them about some of the props he found with Paul in storage, including a sawing box magic trick. They wonder why he's explaining the trick to them, and he exclaims that they should be his assistants. He says they will distract all with their beauty. He gets lost in a memory of women past.

In front of the crowd the trick is a great success, and Chester and the twins take their bows.

Eve and Dell attack Jimmy's jail transport, and Dell beats in a guard's skull. They remove Jimmy from the van.

Chester and Marjorie's argument is interrupted by the twins' attempt at seduction. They want him to deflower them, but he responds with a massive headache. They massage his neck, and he is again lost in memory.

In his recollection, he watched two women engaged in sex. They objected to Marjorie on his lap as he did so, and he left in disdain. They are later shown to be his wife Lucy and her girlfriend Alice, who started a relationship while he was away at war.

In the present, he returns the twin's affections, once they consent to "observation" by Marjorie.

Back at Mott Manor, Dandy receives a report from his private investigator that the twins affections now belong to Chester. Dandy is upset, extolling that they were supposed to be his.

He tries to pack Marjorie into a crate, but she "objects". He recalled when Alice's girlfriend hid Marjorie away. She chides him for wearing his uniform, four years after the war has ended, and for needing the doll involved to become erect. Appearing in human form in his memory, Marjorie told him that he should get rid of the girlfriend and his wife.

Paul discovers and confronts Chester with a new truth: Elsa is to sell the show to Chester. During his negotiations, Chester says Marjorie is to be the headliner. He returned to his tent to find the doll gone once again.

The police arrive once again at the show, where Detective Colquitt searches for Jimmy. A distraught Chester arrives to demand Colquitt find the missing Marjorie.

Chester encounters Dandy, who exploits Chester's delusion saying to find Marjorie hiding in the big tent. Dandy has known all along about Chester and his history. Chester says that Marjorie killed Chester's wife Lucy and Alice in Macon. When he finds her, Marjorie "tells" Chester that he's going to saw the twins in half and kill anyone that keeps them apart.

Maggie tells Elsa there is something she must see.

Dell returns to his caravan to find Desiree waiting with a gun. She wants to know who killed the cops and who helped him. She thinks Dell has gone too far, while Maggie leads Elsa to discover Ma Petite's fate. He tearfully admits to having smothered her. Once he admits that, Elsa shoots him in the head from behind.