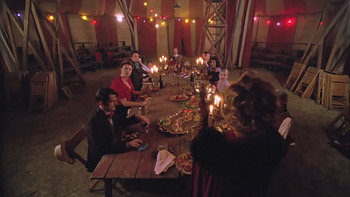 Dandy gives the twins troubling information about Chester. Maggie vows to prove her loyalty to Jimmy. The freaks enforce their harsh code of justice.

Stanley arrives in the rain to a party. Elsa toasts the new owner, Chester, and he responds with a promise to do her proud. Marjorie accompanies him with a sour quip. Elsa asks that he leave while she toasts "Richard Spencer" for bringing her "The Elsa Mars Hour". Elsa says that the feasting will conclude with a film from her collection. Suzi hopes aloud it is not "Signs of the Cross", but the troupe explains the plot of "Freaks" to Stanley. Eve relishes in telling him the tragic ending of betrayal against a betrayer.

He tries to leave, but they ply him with a gift that Desiree says she worked hard on. Inside is the pickled head of the American Morbidity Museum director. Maggie explains that she's told them everything. He pleads with Elsa, but she send him to the throwing knife wheel. Eve spins him while Elsa throws. He continues to plead his case, but Elsa will have none. She has him taken down. He says that Elsa killed Ethel, and he goes on the run to be hunted by the troupe. Pursued under a wagon, he screams at the approaching assailants.

Elsa nurses the hidden Jimmy, telling him that they all killed Dell. He is angry and vengeful, especially at Maggie. Elsa says that Maggie is responsible for saving them with her honesty. He is indignant that Maggie will be caring for him, but Elsa has located Massimo Dolcefino to assist him. Maggie begins by cleaning his stumps and changing the bandages. She wants a clean start and insists her love for him was real. He blames her for the loss of his hands. She says she will make it all right, but he says that without resurrecting Ma Petite, she should prepare to leave.

Elsa greets and embraces her old friend under the big top.

Meanwhile, the twins and Chester have sex under Marjorie's gaze. They ask that she be put away, just this once. He agrees and takes her to the floor before they continue. Later Chester discusses his relationship with Marjorie, and she calls him a murderer. She reminds him that she's a doll, and she's incapable of murder. She also reminds him that the twins will have to go, so that they can always be together.

Penny uncovers a picture of Ethel in her Barnum days. The rest of the troupe discusses Stanley's accusation against Elsa, and they agree it must be true. The commit that Elsa has to go.

Dandy invades the twins' tent, claiming he has new information for them, and that his mother has died. They protest, but he insists he has changed and comes in friendship. He offers them "protection", including a dossier on Chester. Dot spurns him and says that they will not trust him. He leaves the file with them.

Elsa visits Jimmy again with Massimo. She injects Jimmy with penicillin while the men discuss prosthesis. Jimmy wants functional hooks, but Elsa convinces him of elegant function by showing him her legs. She says she trusts him and would have married him. He says his sin was loving her too much. He tells that he hunted down her Nazi assailants. Their leader, Dr Hans Grouper, caught him at the end and tortured him for months. Massimo escaped to Austria, and eventually America in 1947. He says that he now has no love to give her, due to his psychological trauma.

The next morning, Chester lays out the new sequence for the show. They debate whether or not to believe the file while insisting they will no longer be his assistants. He says that the new change-up will be to saw them in half. Maggie offers to take their place. While he runs through the trick with her, he imagines that she is Lucy and then Alice. His dysfunction is apparent to all. He adds manacles to her feet, making it impossible for Maggie to escape. While Marjorie laughs, he saws Maggie in half in front of the incredulous freaks. A delusional Chester thinks he can put the sawed corpse back together, and realizing he can't runs off. Desiree says that Maggie had it coming and that they will plunder her belongings.

Chester "follows" Marjorie, who "says" she will leave without him now that he's screwed up again. He imagines stabbing Marjorie to her death.

Jimmy recalls his juggling debut in Elsa's show in 1946 (in Dayton, Ohio), introduced by Ethel. He was nervous, but she urged him to show what makes her proud of him. Eve enters to inform Jimmy of Maggie's death. She also says Elsa is next to die that night. They examine the plans for Jimmy's new hands, and Eve expresses how happy she is for his new life.

The twins intrude on Elsa and gasp at her legs. They warn her that the troupe has been plotting to kill her for Ethel's murder and urge her to leave tonight to anywhere but here. They say they are even for having saved each other. In Ethel's caravan, Desiree says it is time and leads the charge into the rain with a broken bottle. They find Elsa's tent deserted with a record playing.

Elsa waits in her car for Dandy's arrival. He gives her money and an envelope.

Chester walks into the police station to report "a young ladies" murder. He confesses, as they unwrap the dummy. He says he wants "the chair".

Dandy arrives to claim his prize: Elsa has sold him the show for $10,000 (which he calls a pittance). He admits that show business is his dream, and bids Paul to fetch him a lemonade. He looks over the big top, imagining the possibilities, and takes a bow. From the stage, he hears muffled noises and finds a mutilated Stanley (legless, armless, and tongueless) in a chicken coop as the "new Meep".

Massimo presents Jimmy his new hands, fashioned into his familiar claws. Jimmy sincerely thanks the craftsman.