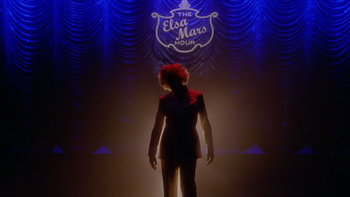 The freaks rebel against the new management. Dandy prepares for his debut performance. Elsa arrives in Tinseltown.

Eve and Paul roll out a banner to publicize Dandy's new act while Penny and Ima discuss Dandy's odd behavior. Paul admonishes them and bids them to ride the gravy train of his money as long as possible.

Dandy gives impulsive stage direction, incredulous that they haven't sold any tickets in the brief time he's been in charge. He blames the performers for being boring and mediocre, thinking audiences want a "new type of freak". He is further rude to them and threatens mutilation. Further simpering brings retaliation from the freaks, as Paul calls him boring and pretentious, and they quit on the spot. They leave him reeling on the ground in the big top.

Elsa arrives in Los Angeles to see the president of the World Broadcasting Network, but has yet to score an appointment. She is rebuffed for the third day in a row by the receptionist. Many cigarettes later, night has fallen and Elsa remains in the lobby. Her would-be appointment has slipped out the back to avoid her. The receptionist makes a crack at her, saying Marlene Dietrich performed Elsa's act better. Elsa slugs her in retaliation, fighting off a restraining security guard. An executive, Michael Beck, comes to her rescue. He admits that they are of similar backgrounds, as his family were Germans as well. She thanks him for his sympathy and he replies that he also happens to be a Junior Vice President of Casting.

Dandy applies makeup for showtime, humming to himself. Paul interrupts him, wanting to talk about back-pay. Dandy shoots him in the head, and subsequently a hiding Penny and Ima, dining Toulouse, cooking Suzi, and several fleeing carnies. Desiree briefly manages to evade him as he is stalked and attacked by Eve before he shoots the Amazon as well. After the fight is over, Desiree has successfully re-hidden herself from him. Bette and Dot are bound and gagged in their tent. He asks them to come with him.

Jimmy returns to find signs of the carnage, but no bodies. He calls for Elsa, not knowing she is long gone. Jimmy finds his friends in a trail leading to the stage under the big top. Desiree finds him and they hold each other, sobbing.

Bette and Dot walk down the aisle in Dandy's Playroom in a lavish wedding procession. Bette is to become his wife. Dot assures him that she will send her mind elsewhere during the wedding night, but Dandy hopes that she will stay from time to time, going so far as warning her if he feels she isn't respecting him. They toast everything to come during their "reception", from the honeymoon to children. As his vision blurs, Desiree emerges as the new cook and housekeeper. He does recognize her until she exposes her breasts. He reaches to stab Desiree with the table knife, but Bette shoots him in the shoulder. Jimmy is shown to be "the new butler". They taunt him that he is to be the star attraction of the new show as he passes out.

He awakes in his briefs inside Houdini's water tank. He pleads that he's fulfilling his God-given purpose and says he forgives and loves the twins. They tell him that he is about to head straight to Hell. Bette insists that he has killed her friends and family and that she hates him. Desiree insists that for all that they are, Dandy is the biggest freak of them all. As water fills the tank, Dandy struggles to escape or break the tank, screaming for mercy and drowns as the four watch in satisfaction.

In 1960 Hollywood, a news reel announces the start of the Walk of Fame with three-time Emmy Award winner Elsa Mars, now famous for the groundbreaking "Elsa Mars Hour" and her gold recording albums. She and her now-husband Michael Beck film a commercial for Campfire Gold coffee. She cuts the film to balk at the script and the product. In her dressing room, Michael brings the network's VP for publicity to discuss a spread for Parade magazine about a Halloween performance. Elsa refuses to perform on Halloween, remembering also her sexual domination of her husband. She comes home to see Massimo, who she has not seen since Florida. He worked in Nevada with the US Army to build villages for atomic testing.

Elsa is bored and lonely, surrounded by sycophants and a cheating husband. She feels cursed by both evaporating and realized dreams. Her 1952 birthday wish was to be loved was driven away by her own actions, and now she wants to run away with Massimo to a casino in Rome. Massimo tells her that he has a terminal illness and has only a month to live.

Later, Michael brings Mr Gable, the president of WBN, to see her. The snuff film has been discovered, and is to be written about in the media. In addition, detectives have discovered her involvement in the Freak Show. Gable tells her — to her shock — that a mass grave was found with the performers. The morals clause in her contract nullifies further involvement with her, and they are paying her the last of the proceeds. She agrees to a farewell Halloween performance after all.

Elsa performs on live television on Halloween night. Her show was viewed by Desiree, who is now married with kids, and Jimmy and the twins, who are now together and expecting a baby. The Halloween performance summons Edward Mordrake, and his troupe of dead freaks, including Twisty the Clown. Mordrake stops Elsa's performance and notes that she summoned him as an act suicide. Elsa begs for him to take her. Edward kills her, but tells her that she does not belong with him.

Elsa awakens back at her freak show. All the previously dead freaks are now present. Elsa is welcomed back in the afterlife. Ma Petite welcomes her by implying makeup for her show. She joins her family in a performance for the dead, finally finding peace in her death.