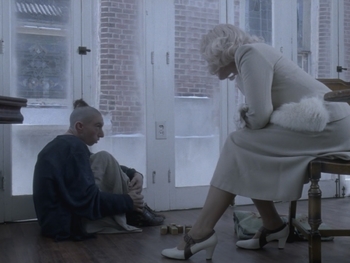 The death of a freak sparks troubling behaviour in Pepper. Elsa reveals the history of the freak show. Desiree grows suspicious of Maggie.

Salty has died in his sleep of a stroke and Pepper is inconsolable, refusing to leave his decaying corpse, thus delaying funereal preparations.

Elsa explains to Stanley that unlike Salty, Pepper's education was successful. He presents a telegram from the head of a television network regarding an opening slot in their schedule and he expects her to go to Hollywood in three weeks. He points out the toll that recent tragedies have taken on her and recommends rest. Elsa disputes that, saying that she must take care of Pepper now. With nefarious plans for Salty's remains, Stanley offers to make the funeral arrangements, suggesting cremation. Thus Salty's head ends up on display near Ma Petite at the American Morbidity Museum.

Desiree reads to Pepper the story of the Velveteen Rabbit as Dell enters. He asks to speak with his wife. He is contrite and wants another chance. She admits that she could never make him truly happy and returns to Pepper, who flies into a rage when Desiree tries to leave to get ready for the show.

Elsa asks after the despondent Pepper. Elsa successfully guesses about Pepper's tantrum, saying that Pepper has known nothing but abandonment. Elsa describes her emigration in 1936, where she blended in with the gypsy chorus-folk (sometimes rising by crippling the competition). She envisioned the freak show to come, and recruited Pepper from an orphanage after the pinhead's family abandoned her. Elsa earned her trust by playing with her, and Pepper became her first "monster", filling Elsa for the first time with unconditional love. As time went on, more freaks joined, but none held Pepper's interest. When a Maharaja toured the United States, Elsa traded Ma Petite for three cases of Dr Pepper. Pepper was overjoyed that she could be a "mother" to the dwarf. Later, she rescued Salty from a home for wayward boys in Cincinnati. The two were soon "married", with Elsa officiating. Desiree opines that after Pepper has lost everyone else, that Pepper's sister may have had a change of heart and should be contacted. Elsa tentatively agrees.

Maggie muses on a flyer of "Lobster Boy" Jimmy when Desiree and Angus emerge. "Mystic Esmerelda" sees that the traveling floor-wax salesman is to start a new future with his new lovebird in the suburbs, but that it will all turn badly (as these stories always do). Desiree tracks Maggie to the carousel wanting an explanation. A drunken Maggie tells Desiree that she and Stanley have been grifters since 1941 Kansas City, where Maggie was pickpocketing, masquerading as a newsie. Stanley took care of the abandoned Maggie. When Desiree asks what their scam is, Maggie admits only to petty thievery. Desiree realizes that the pair may have to do with the disappearances of the freaks. After Desiree threatens her, Maggie returns to her tent to discover the twins, who offer to pay for Jimmy's legal fees. Maggie protests, but Dot insists that the con artist do right by Jimmy, lest he end up like Meep.

Stanley visits Jimmy in jail. Stanley earns some trust with an apocryphal tale of his youth as an orphan, then asks the young man if he committed the murders. Jimmy admits that he blacked out and is only fairly sure that he didn't do it. Stanley says that he has interested Clarence Darrow's "son" Donald in trying his case, but that he will need to produce a retainer. Stanley eyes Jimmy's hands and suggests a way to raise the money.

Elsa and Pepper visit the sister (Rita Gayheart) in Sudbury, Massachusetts. The sister admits that though she gave Pepper up so that she could have children, the sister and her husband never conceived. The sister can't admit to her husband the truth of Pepper. Elsa insists Pepper is a pure soul and a gift, but the sister still has doubts. Elsa emphasizes that Pepper may be crushed forever if she is unloved. Elsa gives Pepper a tearful goodbye.

Maggie tells Desiree in a private audience that she needs time and help to sow the right seeds to save everyone and that there is something she must see. Maggie brings Desiree for a visit to the museum to provide leverage on Stanley. Desiree balks at seeing the disposition of her friends. Maggie faints at the sight of their newest display: Jimmy's hands.

In 1962, Rita describes to Sister Mary Eunice how Pepper came to live with them. Rita became unexpectedly pregnant with a son, Lucas, who she claims was born with a deformity without disclosing its nature. Pepper took over mothering duties. Rita and her husband, in fact, were sick of living lives hampered by Pepper and Lucas and conspired to solve the problem by framing Pepper for murder. The husband, Larry, entered a bathroom while Pepper bathed Lucas and cut off his ears with a knife, then drowned the infant. Rita places the blame on Pepper, and the pinhead is committed to Briarcliff Manor. Sister Mary Eunice is at first disgusted with Pepper, but seeing the remorse on Pepper's face thinks that she is seeking redemption. The nun takes on Pepper as a personal rehabilitation project, leading her to cleaning up the library. Pepper feels nostalgic when she sees, on the cover of LIFE dated July 6, 1958, her old matron Elsa Mars — still ruling Friday nights as TV's darling.