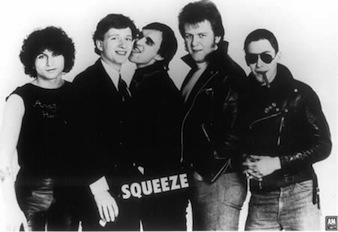 The 1978 lineup of Squeeze. From left to right: Harry Kakoulli, Glenn Tillbrook, Chris Difford, Gilson Lavis, and Jools Holland
To change the mood a little I've been posing down the pub,
On seeing my reflection, I'm looking slightly rough,
I fancy this I fancy that I want to be so flash,
I give a little muscle, I spend a little cash,
But all I get is bitter and a nasty little rash,
And by the time I'm sober I've forgotten what I had,
And everybody tells me that it's cool to be a cat,
It's cool for cats.
Squeeze, "Cool for Cats"
Advertisement:

Squeeze is a new wave band from Deptford, South London. The group formed in 1974 when Glenn Tilbrook answered an advertisement Chris Difford posted looking for a guitarist and bandmate. The two began writing music together, and were soon recording and publicly performing. Their first hit came in 1978 with "Take Me, I’m Yours". The band experienced great success, at least in the U.K., with songs that followed, including "Cool for Cats", "Up the Junction”, "Tempted", "Labelled with Love" and "Black Coffee in Bed".

The group broke up for the first time in 1982 due to artistic and personal tensions in the band, especially between main songwriters Difford and Tilbrook. Realizing that their songwriting partnership was too valuable to be scrapped, Difford and Tilbrook collaborated again in 1984 to release a Squeeze-unaffiliated album (aptly titled Difford & Tilbrook) before reforming in 1985 as Squeeze once again. Further chart success followed, including the US hit “Hourglass” in 1987. The band continue to tour and record today.

Glenn Tilbrook and and Chris Difford have remained the two constants in the band’s lineup through their many years together. Other notable and long-standing members in the band include keyboardists Jools Holland and Paul Carrack, bassists John Bentley and Keith Wilkinson, and drummer Gilson Lavis. The current line-up consists of Tilbrook, Difford, keyboardist Stephen Large, bassist Yolanda Charles, drummer Simon Hanson and percussionist Steve Smith.

For the final Velvet Underground album of the same name (which the group took their name from), see Squeeze.

Tempted by the tropes of another: