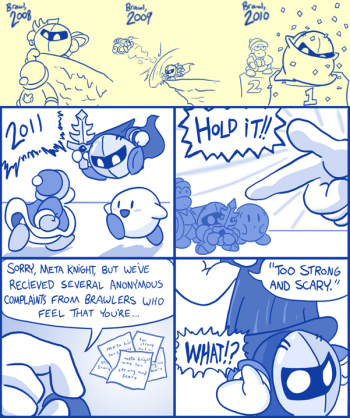 Two variations of The Scrappy specific to Video Games and/or Tabletop Games.

The first, often seen in fighting games, concerns the best characters getting hated not out of a hatedom but for being overused and/or downright difficult to defeat due to their high power, gameplay-wise; understandably, those two points get on a lot of people's nerves and tend to be favored by other people. Characters who are Difficult, but Awesome tend to avoid this fate because they are hard to play well, but disproportionately powerful examples can still earn this status. A typical Tier Induced Scrappy is a high tier character with next to no learning curve, though high learning curve characters who are unreasonably difficult to beat when played by a master (especially if they also happen to be extremely frustrating to play against and/or boring to watch) can and will earn this status. Stone Wall characters are the most common candidates for this trope (especially heavy zoners), though touch-of-death rushdown characters (particularly ones with good approach options) also tend to earn the playerbase's hatred. Characters with massive weaknesses who are strong in spite of those weaknesses are also common targets just based off of principle; people hate Fake Balance, and these characters are often powerful when they shouldn't be. See also Too Qualified to Apply. In other genres than fighting games, such as MOBA or Hero Shooter, these high-tiers can also be hated for being extremely difficult to deal with (if you're the enemy) or making the game centered around them and them alone (thus making you feel pointless if they're on your team). And for single-player games, they can be hated for being so powerful that they remove all challenge from the game.

The other, more common to RPGs, is a character who is widely hated or disliked because they just suck in gameplay terms. They might be the nicest person in the world, but if they're The Load in combat or gameplay, their fate is decided. A Low Tier Induced Scrappy has no Magikarp Power; they're bad from the start and they never get to a point where they become worth the trouble or able to hold their own, no matter how much you invest into them, especially when there's other, more rewarding characters on hand. At perhaps this trope's most frustrating extreme, this can result in the player being forced to choose between benching a party member that might even be their favorite character, or trying to stick through the game with them regardless...which depending upon the game may be enough of a pain to qualify as a Self-Imposed Challenge. In fighting games and MOBAs, they are frequently Skill Gate Characters who are easy to pick up and do well with and are dominant in lower-level play, but do exceptionally poorly in higher-level play; the Scrappy part often comes from bad players who insist on using them with the same suboptimal strategies and builds and refuse to get better, get destroyed by competent players, and proceed to ragequit, lagswitch (if possible), abuse report functions, send abusive private messages, rage on message boards demanding nerfs, and generally act like incorrigible Scrubs.

The final and rarest breed is a character who has been in both positions at least once; this tends to happen to characters with movesets that are very sensitive to metagame shifts (which can and often will make previously useless characters into rising stars), and characters with awkward or outdated movesets also tend to fall victim to this due to the difficulty of balancing them without giving them buffs that leave them obnoxiously overtuned rather than genuinely good or nerfs that make their whole kit fall apart. Gimmick characters tend to fall victim to this due to the inherent difficulty of balancing a character around one very specific gameplay element, and when they are powerful, they are often frustrating to deal with and/or overtuned to make up for their often glaring weaknesses.

It is worth remembering that a Metagame is an evolving and changing thing, especially within competitive gaming. Characters initially seen as weak or useless may prove to be more useful than initially thought, and characters initially seen as a Game-Breaker may eventually go down on the tier list as ways to counter them are discovered. As such, take examples listed here with a grain of salt, especially if it's regarding a newer game.