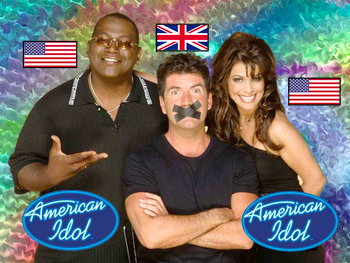 "This pic is absolutely dreadful!"
"Anne Robinson, Simon Cowell, and now me...proving once again that the British are a bunch of [expletive deleted]."
— Jimmy Carr, on the trailer for the US version of Distraction
Advertisement:

We can blame Simon Cowell for this. After his success on American Idol, just about every American Reality Show has seen fit to cast a British guy as the snarky, ultra-critical judge.

The Mean Brit will bluntly tell mothers their kid sucks and make two-year-olds cry if their talent isn't good enough for him. The flip side of this is that if he does compliment you, it means you must be really good, and he's usually willing to stake his reputation on anyone who measures up. The other good quality some of them possess is that those who fall short of his standards but need help (or previously impressed him but have lost their way) can expect constructive criticism rather than just barbs. In the worst case, they come across as a bully with a media platform and a fortune picking on people who can't fight back.

Expect him to appear on any show that has an American Title. Call it subtle (or not-so-subtle) nationalism, but note that these people are seen as nasty at home too. Another possible explanation is that several of these reality shows originated in Britain, such as American Idol (from Pop Idol), Dancing with the Stars (from Strictly Come Dancing), and America's Got Talent, which was based on an unaired British pilot which would eventually become Britain's Got Talent.

Not surprisingly, the 'Simon Cowell Effect' has left a mark on the Web, with many of the most popular critics - especially for video games - falling into this category.