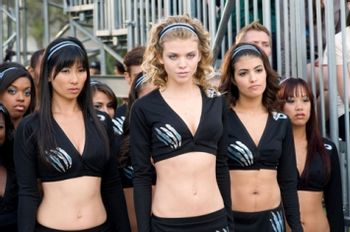 In Hollywood, All Guys Want Cheerleaders... until they actually get to know them.

In any High School setting, no Stock Character is portrayed as harshly as the cheerleader. Cheerleaders are often depicted as outright evil, with the Alpha Bitch as their leader. If the girls aren't evil they might just be Brainless Beauties, following their Alpha Bitch leader out of ignorance or a desire for her approval. The Captain, if not the whole squad, will usually be portrayed as Really Gets Around and/or a Hormone-Addled Teenager. From evil to slutty to dumb, any cheerleader in North American media can be expected to be portrayed as shallow and superficial, because popularity is her first and only concern.

If a sympathetic, smart character is a cheerleader, she will probably end up quitting the squad as part of her 'growth' (apparently in Hollywood, one can't be a rounded person and remain a cheerleader). A good girl might want to join the squad, but her friend will think that cheerleading is inherently bad and try to stop her, leading to a lesson on how a person should get to do what makes her happy.

This trope has noticeably weakened in recent years (if only slightly), perhaps due to the popularity of things like the Bring It On-series. A sympathetic depiction is still more the exception rather than the rule, however. In fact, media with positive depictions of cheerleaders will often feel the need to go out of their way to explain to the audience (via an outsider POV character like in Hellcats) that cheerleaders can be good people too, as well as show that cheerleading in real life isn't even close to being how it's portrayed in pop culture. For starters:

On another note, this trope isn't Truth in Television (unless diffusion of responsibility

is a factor) and many of the stereotypes people think of when it comes to cheerleading were basically created by Hollywood—most people who do cheerleading do it because they like it and are generally very extroverted. While some cheerleaders in real life can be mean, most are typically genuinely nice people, as bitchiness doesn't exactly mesh well with winning the crowd and teamwork is very important (though you should still Beware the Nice Ones). Competition level cheerleading also requires fitness levels around the same as any other professional athlete and cheerleading is one of the most likely causes of female sports injuries due to the gymnastic stunts performed and lack of protective gear. Anyone performing at that level has the same drive and dedication as any other athlete.

See also Jerk Jock, Alpha Bitch and Popular Is Dumb. Contrast with the positive Cute Sports Club Manager. A cheerleader also has a better than average chance of being a Dumb Blonde, but this isn't required. They can be The Fashionista, but often suffer from a Limited Wardrobe: at least during school hours many cheerleaders never wear an outfit other than their uniforms.

If you're looking for the cheerleading performance itself, her potential foil, or maybe just the dress worn while doing it, you want the Pom-Pom Girl. A cheerleader who is not an Alpha Bitch can sometimes be portrayed as a Lovable Jock.

A Midriff Baring Outfit is optional for Fanservice.