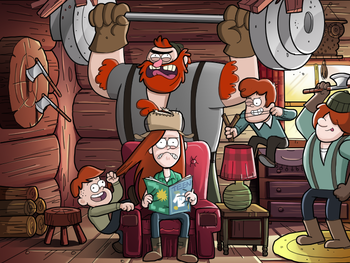 . Used with permission.
"I always wanted a brother. [...] Instead, I got stuck with two sisters."
— Arthur, Arthur, "The Perfect Brother"

The outnumbered sibling occurs when a character (usually the protagonist or at least a major character, as they're more likely to have a defined family) is the only son or daughter in a family with three or more children. This can result in the character hoping and praying for a sibling of their gender, Parental Favoritism either for or against the character, and the character feeling either superior or inferior to the rest. There are few different places to put the only son/daughter:

Often (but not always) occurs with Massive Numbered Siblings, since a family of three doesn't make this trope particularly interesting. See also The Smurfette Principle, The One Guy and I Have Brothers. Often appears in a character's Back Story even if it isn't depicted in the plot.

Highly expect A Boy, a Girl, and a Baby Family, Annoying Younger Sibling, Big Brother Bully and/or Cain and Abel and Seth to come into play and for creators to throw in a Missing Mom (for a girl) or a Disappeared Dad (for a boy) for added effect. Extreme cases may include a Promotion to Parent as well.