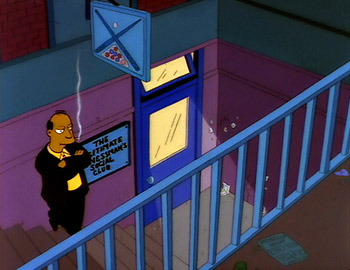 Looks legitimate. So why the human brick for a bouncer?
"Just a Souvenir Shop. Nothing Suspicious About It. No Need to be Alarmed."
— Sign in front of Team Rocket's base, Pokémon HeartGold and SoulSilver
Advertisement:

Ah, The Mafia. Known for their subtlety and planning, they can orchestrate murder, drug dealing, prostitution, racketeering, and the sale of illicit tomato sauce without anyone finding out. But their fronts lack the same subtlety, as can clearly be seen on the massive sign above their hideout that says "Legitimate Casino! Not Mafia-owned!" Expect a great deal of Doublespeak. In many cases, what gives the game away is the effort put into securing a supposedly legitimate establishment — if it's not important, why is there a scary guy in front staring at passers-by?

The Trope Namer is Fat Tony and the Springfield Mafia's lair on The Simpsons, itself a reference to Al Capone's famous claim of being just "a legitimate businessman". Compare Most Definitely Not a Villain. Contrast Covert Group with Mundane Front. Not to be confused with the Smoky Gentlemen's Club, although it may look like one, especially if it's the personal hangout of The Don himself.