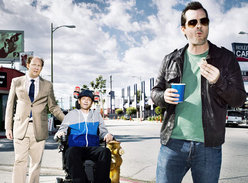 Legit is a comedy series premiering on FX in 2013.

Jim Jefferies plays Jim Jefferies, a bit of a scumbag trying to follow his mother's wish, and become more legit. To do so, he decides to come stateside and assist Billy, a man with muscular dystrophy, and the brother of his other friend, Steve.