I Have the High Ground 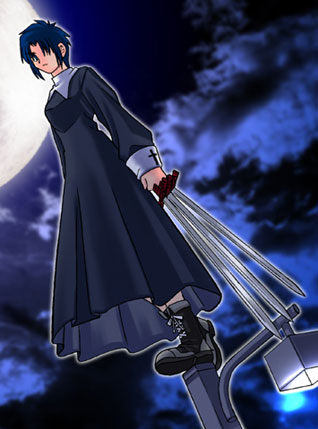 The three swords help too...
"At least the whole jumping on telephone poles thing is cool."
— Nope: The Anime

Supernatural, magical, or just plain awesome beings know there's no better place to be effortlessly standing on than tall and usually thin objects, be they pine trees, lampposts or the nearest available tall building. This is flying for people who cannot fly. Or even the ones who can.

Less about true strategy and more about looking cool. Expect Dramatic Wind (actually, wind speed increases with altitude, so wind that seems dramatic to those on the ground is ''normal'' at high altitude). In anime and manga this has become a choice dramatic entrance for villains, introduced via a panning away of the camera from a completely every day scene, or the aftermath of a dramatic event, to reveal that said villain was watching all along, and provide a nice segue for the next part.

It also serves as a hint that the character doing it has some kind of supernatural or superhuman skills, given the obvious difficulty to climb up casually to the tall place without them.

This seems to have originated from training techniques that involved standing on bamboo; see, for example, the Crouching Tiger, Hidden Dragon and Teen Titans examples. This is common in Wire Fu movies.

The Trope Namer is Obi-Wan Kenobi in Star Wars Episode III: Revenge of the Sith, although this is not actually an example of the trope; when the geography that you stands compares you superior, you are playing with Geo Effects. See also Sitting on the Roof.