Girl in a Box 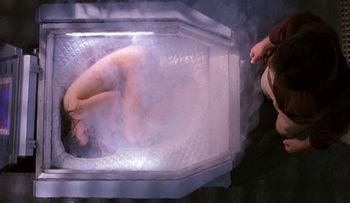 Santa Claus is getting weird.
Advertisement:

The heroes will occasionally discover a girl who, for whatever reason, has been placed in a box, usually in suspended animation (or failing that, a box with air holes). Most of the time, this is part of the introduction of a new major character. Sometimes she could simply come in a box in mint condition.

Notice the phrase itself in Japan means a rich/noble girl that is usually overprotected and knows little of the world and may even have little freedom. Compare with "a bird in a gilded cage". So Japanese works sometimes give this metaphor a more physical meaning. There's even a movie from 1935 with the exact name, Hakoirimusume (literally, "girl in a box").

Possibly related to People Jars, although usually more benign. If the girl is dead, it may be a case of Body in a Breadbox or Dead Man's Chest. See also Punk in the Trunk, Packed Hero and Human Mail. Often, as in the page image, she'll have been stored in the fetal position, possibly naked.

Usually the female counterpart of a Sealed Badass in a Can but they can overlap. Another neutral version of Sealed Evil in a Can or Sealed Good in a Can.

Esteban discovers Zia bound and gagged a box aboard the Esperanza.

Esteban discovers Zia bound and gagged a box aboard the Esperanza.