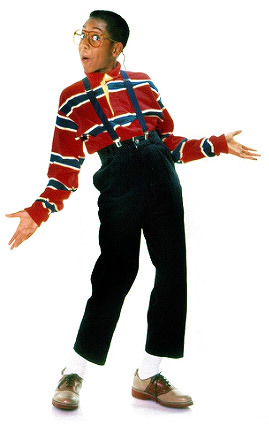 The Extraverted Nerd is a young teenage nerd (almost Always Male), who dresses and behaves very awkwardly. Unlike the usual stereotypical nerd, he's completely oblivious to his nerdy nature or at least acts it, and is a Casanova Wannabe who goes after girls without any fear of rejection. In fact, he doesn't take "no" for an answer. He usually serves as the stooge to the main character.

Many nerd characters in shows with laugh tracks are like this. The TV Genius is a less annoying example. Although, whether an Extraverted Nerd has actual high intelligence or merely a high opinion of himself varies.

Often combined with the TV Genius. Compare Small Name, Big Ego and if they're wholly unattractive but actually able to get girls, Kavorka Man.

Compare/contrast Dumber Than They Look, when a character with stereotypically "smart" appearance is not actually smart.

Resident dork Steve Urkel ends up being the one to liven up a dead party.

Resident dork Steve Urkel ends up being the one to liven up a dead party.