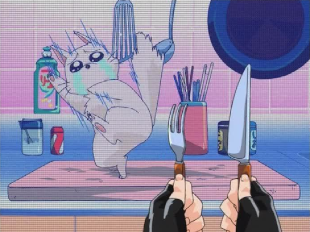 Sometimes the Ridiculously Cute Critter in the series isn't the Team Pet. Sometimes the characters are just keeping this poor animal around as emergency rations. Humor is often obtained when the creature is aware of their fate. There may even be a minor subplot about it trying to escape. There's rarely any humor when people who do love their dog are forced to think about eating it because, you know, the world has ended.

Can cross over with Let's Meet the Meat and What Measure Is A Nonhuman. May involve Meat-O-Vision. More convenient than Reduced to Ratburgers, as edible pets are easier to catch (they may even come when you call...). See also No Party Like a Donner Party.

Not related to Kick the Dog or Shoot the Dog. If villains eat a certain type of meat to demonstrate how evil they are, you're probably looking at Exotic Entree. If a given culture is depicted as Acceptable Ethnic Targets because they purportedly eat critters that another culture regards as pets, that's a form of Foreign Queasine. Please refrain from eating Tropey the Wonder Dog. He's our Team Pet, and we need him alive.

Contrast with Adopt the Food, for when the meal becomes the pet. No relation to If You're So Evil, Eat This Kitten! (although both can overlap).