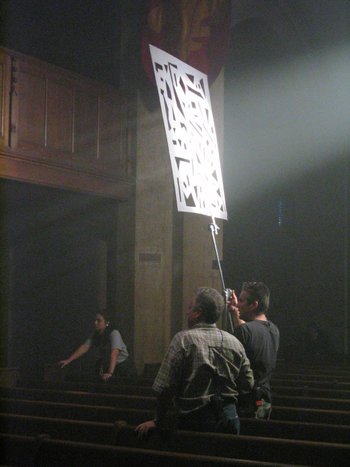 A cucoloris is a flat opaque object with holes in it. It is held in front of a light to make a pattern of shadows on the subject, such as tree branches. It can be constructed out of styrofoam, wood, or cardboard, or if it is meant to be mounted very close to the light, even metal. It's sometimes spelled cukoloris, kookaloris, cookaloris, or cucalorus.

The name is often shortened to "cookie," a usage which is probably reinforced by the fact that a cucoloris "cuts holes" in a beam of light much like a cookie cutter cuts cookies from a sheet of dough. A similar device in theater stagecraft is called a "gobo," supposedly short for "goes before optics." A gobo is inserted between the actual lamp and a focusing lens, permitting a much more focused image from the gobo, in the manner of a slide projector. A "cookie" would instead be hung after the lens and produces an indistinct shadow.

It can also refer to a flickering light source or reflection, to suggest, say, a pile of gold or glowing orb of power lighting up the faces of the actors. The gold itself need not be visible to the audience.

Used in any number of high tech shows and movies in which a computer display seems to be projecting its screen image onto the user's face. It's not entirely accurate, but that's not why they use it in the first place.