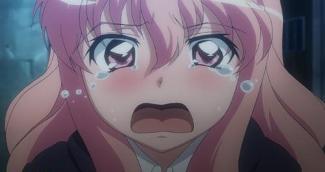 So sad, and yet so adorable.
"I can't believe this. A guy made me cry."
— Rin Tohsaka, Fate/stay night [Unlimited Blade Works]
Advertisement:

A character, usually female and often a tsundere, cries. Unlike in cases of Inelegant Blubbering, the crying person will be, if anything, more attractive-looking than they normally are, so that the audience can easily sympathize with them in their moment of emotional vulnerability.

There is an inexplicable phenomenon that the tougher a character is, the more adorable they will be when a Sparkling Stream of Tears pours out of their eyes. The tyrant instantaneously becomes The Woobie, whose endearingly vulnerable sobs and pleas for sympathy makes the coldest of hearts want to hug her till she feels better. This is considered Moe beyond belief by fandom in general, even by those who are not normally into that sort of thing.

Sometimes this moment acts as a roadstop, a turning point in which the character starts to slowly become a better person.

However, other times, having felt embarrassed for daring to be vulnerable, the once adorable woobie will immediately thereafter turn into a tyrant of epic magnitude worse than the mere Tsundere she was to compensate for her brief moment of weakness.

Truth in Television, of course, but it's by no means as common as it is in media - most people will fall under the category of Inelegant Blubbering when tears are shed, and this is likely to be for an evolutionary reason, as the more 'ugly' aspects of crying - things such as blotchy skin, ragged breathing, runny nose, etc. are traits that have been refined through selection to catch the attention of other people who might be able to console the crier or offer assistance.

Note that this trope can also occasionally apply to a male character. What differentiates this from Manly Tears is that whereas Manly Tears shows the sensitive attributes of an already decent male, Cry Cute is usually used on a male character in the Alas, Poor Villain context that humanizes them. Also keep in mind that a character does not necessarily even need to be a tsundere in order to qualify for this trope. See also Tender Tears, where the crier is normally nice and sensitive.

A Super-Trope to Cry into Chest. Contrast with Inelegant Blubbering.