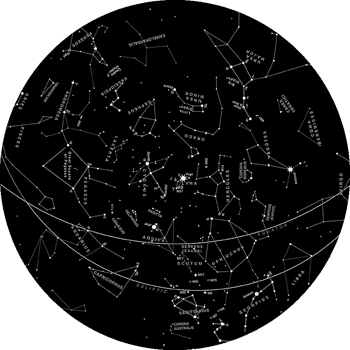 and the stars within are seen every night. Astrologers tend to add significance to these constellations and asterisms, and therefore they can make an excellent Motif and are commonly seen in fiction.

There are several variations but the most notable and widespread are the ones from Claudius Ptolemy and The IAU. Consisting of 88 modern ones, and 52 obsolete ones

. These constellations tend to take their names from Greek Mythology or have Greek names, as many were identified and named by Ancient Greek astronomers, but there are some exceptions. The signs of the Western Zodiac are all named after Western constellations.

Chinese astronomy and astrology traditionally use a different set of constellations

, using the same stars but in different Asterisms. The Four Gods are the equivalents of the zodiac therenote Not that China doesn't have its own Zodiac, but that's more attuned to years than to the elliptic, unlike the Western one.. India and the Australian Aborigines have their own systems of constellations as well.

Asterisms are a similar concept, but they are not seen as official constellations. They can be seen as sub-constellations, in a sense, as many are part of larger, officially recognized constellations. Common ones include the Big Dipper, which forms the tail and body of the Great Bear, and Orion's Belt, which is of course part of the Orion constellation. Other asterisms have stars from multiple constellations — the Summer Triangle, for instance, is formed by connecting the brightest stars in Aquila, Cygnus and Lyra. The same is true for most obsolete constellations, the most notable of which is Ptolemy's Argo Navis, which was split for being too big. Its parts still collectively represent the ship as the constellations Carina (the keel), Puppis (the stern) and Vela (the sails), as well as Pyxis (the mariner's compass, which used to be part of the mast). Clusters like the Pleiades are also smaller groups of stars found within constellations but don't form any coherent image.

A common astronomy error in science fiction is to treat constellations as though they were clusters of stars that are actually physically near each othernote This happens with (some of) the stars of constellations as Ursa Major, Orion, or Scorpius that share a common origin and are relatively close to each other, but even in this case we're talking of separations of up to hundreds of light-years, with characters or cultures described as being "from the so-and-so constellation" despite the constellation only existing as a two-dimensional pattern seen from an arbitrary point thousands of light years away. The closest real life comes to this is the way constellation are used to divide the visible night sky into sectors, and some astronomical objects like the Andromeda Galaxy and Orion's Arm are named for the constellation they are in.

Uses of constellations in fiction:

open/close all folders
Example of the Constellations as a motif, someone's soul, or the basis of something

Real Life
Examples of constellations as a gag

Examples with claims that treat a constellation as a location