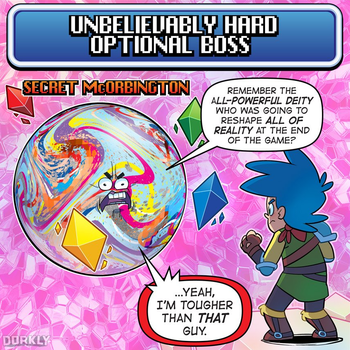 "Geez, who started that, anyway? Isn't it enough to have cleared the game in the first place? If there's always an extra dungeon, then the last boss just becomes a midboss!"
— Marisa, Touhou Chireiden ~ Subterranean Animism, Extra Stage
Advertisement:

The Bonus Boss is a type of Optional Boss which serves to test players' mettle. They typically aren't directly connected with the main plot of the game, even if their world-ending strength rivals that of the Final Boss. Sometimes this is justified with an in-universe explanation, but more often than not, it's a glaring example of Giant Space Flea from Nowhere, which itself is a subtrope of Gameplay and Story Segregation. Another common nickname for them is "Superboss."

There's no real limit to the number of bonus bosses you can fight; Final Fantasy X had dozens of them cordoned off in the optional (and highly incongruous) Monster Arena. The key features are that defeating one isn't necessary to complete the game, and they require quite a bit of conscious effort to find. Their usual habitat is the end of a Bonus Dungeon, Brutal Bonus Level, sidequest, or Boss Rush. If a late-game boss has multiple difficulty levels, expect the absolute highest level to be considered a bonus boss, if not the True Final Boss.

Like any good Boss Battle (or Final-Exam Boss), when fighting them, it's pretty damn useful to anticipate their actions. It's demanding but strategic. Prizes can include anything from an Infinity +1 Sword or Last Disc Magic to a simple Cosmetic Award. The lure of overcoming an extremely dangerous enemy is enough for dedicated players; if you're tough enough to beat the strongest boss a game has to offer, you're invincible by that point, and any further upgrades are redundant and only for bragging rights. The game then picks up from there and just pretends the bonus boss never happened.

Compare and contrast the True Final Boss, which often (but not always) follows and/or replaces the alleged final boss. The former is generally not an optional encounter once the event is triggered, whereas a Bonus Boss almost always is. You may even earn a Golden Ending for slaying it, and as icing on the cake, it's usually the canon ending.

Contrast Skippable Boss, which is (as the name implies) possible to avoid entirely, but you're probably going to fight it if you took the most intuitive path — in other words, you didn't try to Sequence-Break.

A Legacy Boss is a Bonus Bonus that happens to be a character from a previous installment.