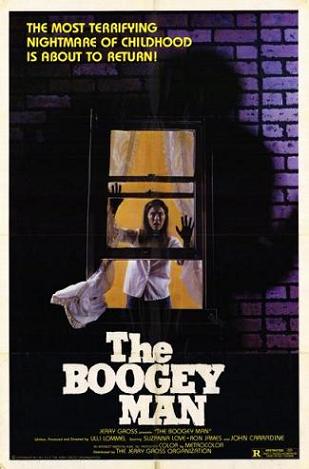 The most terrifying nightmare of childhood is about to return!
— Tagline
Advertisement:

The Boogeyman is a 1980 horror film directed by Ulli Lommel. It stars Suzanna Love, Nicholas Love, and John Carradine.

After a horrifying incident in her childhood, Lacey — now grown and married with a young son — lives with her aunt and uncle on a farm in relative tranquility. Her brother Willy also lives with them, though he has not spoken a word since the night he stabbed his mother's cruel and abusive lover to death. It seems the past is returning to haunt her, as Lacey begins having nightmares about being tied to a bed and threatened with knives.

At the recommendation of her psychiatrist, Lacey and her husband visit her mother and the house she grew up in. She smashes a mirror when she sees the reflection of her mother's lover approaching in it. This proves to be not the end of her nightmares but merely the beginning of a new one...

A sequel, Boogeyman 2, was made in 1983, starring Suzanna Love reprising her role as Lacey. The premise is Lacey is approached by a group of Hollywood phonies to make a film based on her experiences. The Hollywood crew are subsequently killed — one by one — by the mirror spirit.

Return of the Boogeyman was released in 1994, and supposedly occurs alongside the events of the original (so they can pad things out with old footage recycled as "visions") and involves a psychic being haunted by the mirror man.

Not to be confused with the 2005 film, simply titled Boogeyman (2005) and its sequels, Boogeyman 2 and Boogeyman 3.

The first film contains examples of the following tropes:

Boogeyman 2 has examples of: