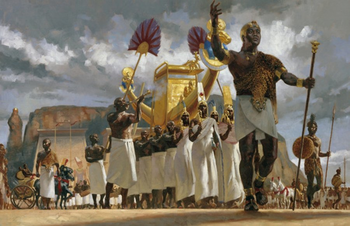 "Princes shall come of Egypt; Ethiopia shall soon stretch out her hands unto God."
— Psalm 68:31, The Bible
Advertisement:

Africa, but back when the fabulous wealth and towering achievements of its civilizations left the known world in awe. Though Egypt is by far the best known of these, other sophisticated and literate empires on the continent, such as Kush, Axum, and Meroe, flourished for centuries south of the lands of the pharaohs. In fact, at one point the kingdom of Kush actually spread beyond the Sudanese Nile and conquered and ruled Egypt for about a century as its 25th Dynasty (ca. 734-664 B.C.). Meanwhile, to the west, complex cultures like the Nok and Dar Tichitt cultures laid the groundwork for the vast west African empires that would arise in later centuries. In the Maghreb, Phoenician colonists in conjunction with Berber kingdoms would give rise to the powerful Carthaginian empire which struggled with Ancient Rome for domination of the Mediterranean world. In the northern reaches of the Sahara Desert there developed a sophisticated society of people known to us as the Garamantes who used elaborate tunnel networks to exploit underground water resources for their cities in otherwise unforgiving desert.

How have others seen Ancient Africa? When the Ancient Greeks referred to Africa they tended to focus on Egypt or Ethiopia as mystical, exotic civilizations. In Ethiopia, Axum quickly rose from city-state to empire, and for a time spread all the way into southern Arabia, where the exploits of its kings would earn a mention in the Quran. In third century Persia, Axum was even named as one of the great four empires that dominated the world by Mani, the founding prophet of Manichaesm. In the medieval era, tales of wealthy West African Empires like Ghana and Mali, mingled with rumors of Ethiopian kings that fueled the legend of Prester John in Europe. The ancient Chinese on the other hand would be more familiar with the Swahili city-states that dotted the East African coast and plied the high seas of the Indian Ocean. More modern depictions in Western fiction may not differentiate between modern and ancient tribal Africa. Depictions may also reference African Mythology.

In reality, Africa has a history as stocked full of rising and falling empires, artists, intrepid merchants, heroes, power-mad lunatics, and epic battles as anywhere else in the world.

Since the popularity (and public knowledge) of Egypt far surpasses that of the rest of the continent, see Ancient Egypt for tropes solely dealing with it. See also Darkest Africa and UsefulNotes.Africa.