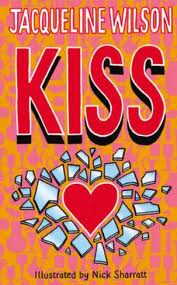 How did your first kiss go?
He leaned forward a little. He had only to move a fraction more, angle his head sideways, and we would be kissing.
Advertisement:

Kiss is a Jacqueline Wilson novel about a teenage girl named Sylvie and her lifelong best friend Carl, whom she has a crush on. However, Sylvie's attraction to Carl hits a snag when Carl comes out as gay.

Nothing to do with the band KISS.