Film / What's Love Got to Do with It

Judge: You’re going to walk out of here with absolutely nothing.
Tina: Except my name. 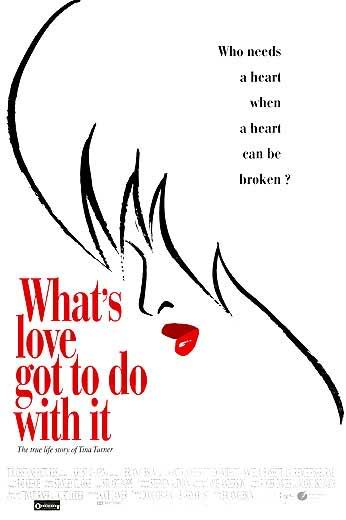 Who needs a heart when a heart can be broken?
Advertisement:

What's Love Got to Do with It is a 1993 Biopic, based on the 1986 autobiography of Tina Turner. The main stars were Angela Bassett, Rae'Ven Larrymore Kelly, and Laurence Fishburne. The film was directed by Brian Gibson, previously known for such films as Breaking Glass (1980) and Poltergeist II: The Other Side (1986).

She at first works as Ike's vocalist before becoming his partner "Tina" and then his wife. The film goes on to examine both their music careers and turbulent personal lives through several decades as Ike becomes increasingly unstable and abusive. Eventually, she leaves him (they separated in 1976, and the divorce followed in 1978), and goes solo in the music world to great success.