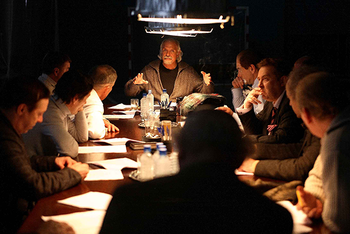 It is a remake of the American all-time classic 12 Angry Men. Twelve angry Russian men are the jury in the trial of a Chechen youth who is facing life imprisonment for the murder of his Russian adoptive father, who took the boy home from the Chechnya war. As with the 1957 movie, the jury seems to be poised for a quick Guilty verdict, but one holdout—in this film juror #1—surprises the rest by voting Not Guilty. As with the 1957 movie, #1, after first simply insisting that they should take more time to deliberate, starts to poke holes in the prosecution case.

The jurors convene not in a cramped jury room as in the original, but in the gym of the next-door high school, because the courthouse is being renovated. As with the 1957 movie, the most insistent Guilty vote is #3, though this Juror #3 is an obnoxiously racist cab driver and old-school Russian who hates Chechen Muslims and Jews. Other jurors include a businessman who was educated in America, an elderly Jew, a surgeon, an actor, a gravedigger, a TV producer—a broad cross-section of (male) Russia. #3's offensive personality starts to sway more jurors to the Not Guilty side, as does the calm logic of #1, who casts more and more doubt on what seemed an open and shut case.

Besides directing the film, Mikhalkov also stars as juror #2, the foreman.