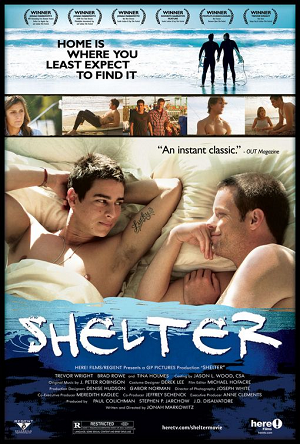 Sometimes referred to as the "gay surfer movie," Shelter is actually much more than that. It's about a sweet romance between Zach, a young man with a lot of artistic talent and a difficult family life, and Shaun, the older brother of Zach's best friend Gabe, a writer who has come back to his old home after a break-up. Zach and Shaun begin spending time together, both surfing and otherwise, and eventually fall for each other, despite the fact that Zach had been in an on-again, off-again relationship with a girl, Tori. Zach has to learn to navigate being there for his young nephew Cody (whose father is never seen and whose mother, Zach's sister Jeanne, often seems uninterested in), deciding whether or not to go to art school, and being in a new relationship with a man.