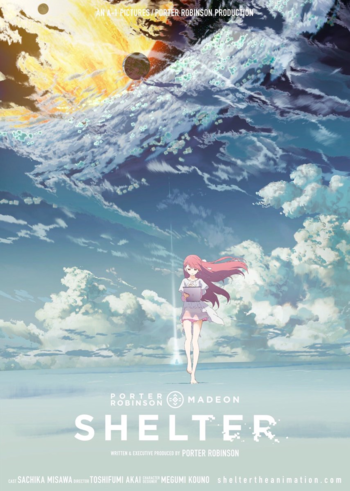 "I'm not alone."
"I could never find the right way to tell you
Have you noticed I've been gone
'Cause I left behind the whole world you made me
But I will carry it along
And its a long way forward, so trust in me
I'll give them shelter like you've done for me
And I know I'm not alone; you'll be watching over us
Until you're gone..."
— Porter Robinson and Madeon, "Shelter"
Advertisement:

Shelter is a 6-minute animation produced by A-1 Pictures and an accompaniment to the song of the same name by Porter Robinson and Madeon. It tells the story of Rin, a 17-year old who lives in a virtual reality that she can control with a tablet and stylus. However, she is all alone and doesn't remember how or why she ended up there.

during the 2016 New Year's Eve Dragon Ball Z Kai marathon, making it both the first subtitle-only anime and the first music video to air on Toonami.

There are unmarked spoilers below.