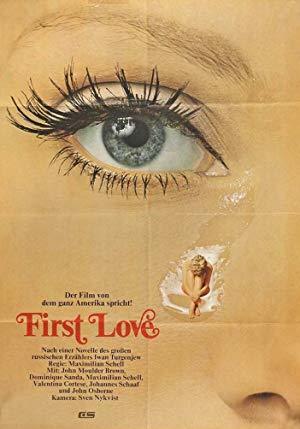 First Love is a 1970 film from Switzerland directed by and starring Maximilian Schell.

The setting is Russia, spring 1915. The protagonist is Alexander, a 16-year-old boy who goes out to his wealthy family's country estate with his mom and dad (Valentina Cortese and Maximilian Schell). They appear to be wealthy enough to sit around and do nothing all day, which is how Alexander meets the lovely Zinaida (Dominique Sanda). 21-year-old Zinaida lives on the next estate over with her mother, the Princess Zasekina, who despite being a princess is flat broke.

Alexander is immediately infatuated with beautiful Zinaida, who is only five years older than him but seems worlds more mature. He is disconcerted to find out that she is entertaining several older admirers—an army officer, the local doctor, a rather ridiculous poet. Alexander continues mooning around after Zinaida, though, until he learns a terrible secret.

First of eight feature films directed by Maximilian Schell, who had been an international star as an actor since Judgment at Nuremberg. The cinematographer was the legendary Sven Nykvist, best remembered as the long-time creative partner of Ingmar Bergman.