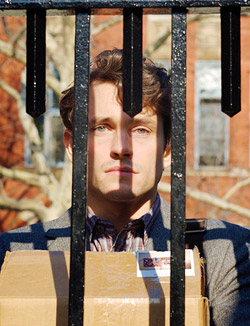 "My favorite children's book is about a little prince who came to Earth from a distant asteroid. He meets a pilot whose plane has crashed in the desert. The little prince teaches the pilot many things, but mainly about love. My father always told me I was like the little prince, but, after I met Adam, I realised I was the pilot all along."
— Beth Buchwald
Advertisement:

Adam Raki (Hugh Dancy) is a twenty nine year old man with Asperger Syndrome living alone in Manhattan after his father's death. He has difficulties communicating with others, the only real friend he has is his father's old best friend war buddy Harlan who is the only one who knows exactly how to deal with him. Adam works as an electronic engineer at a toy company, and spends his free time indulging his love of space exploration. Beth Buchwald (Rose Byrne), a school teacher and aspiring children's author, moves into the apartment above his. They meet doing laundry and from there they tentatively begin to form an awkward friendship- that leads to something more. During the movie Beth has to deal with her father being indicted, facing a jail sentence, and revealing a confronting secret which throws their relationship into turmoil; Adam has to deal with being fired, finding a new job and making his relationship with Beth work.