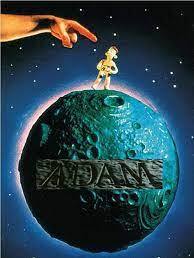 It is a satirical take on the creation of Man in the Book of Genesis. As the opening credits roll a live-action hand can be seen scooping up some clay. The hand shapes the clay into a naked little man, Adam, who comes to life after the hand smacks him on the head. After some slapstick comic business, the hand makes a companion for Adam.