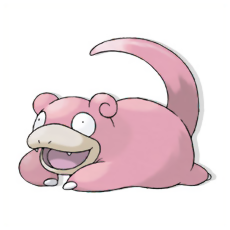 Slowpoke are pink, quadrupedal Pokémon with long tails. They spend most of their time at the water's edge, fishing using said appendages. [Trainer's Note: There are occasional sighting of blue Slowpoke; these rare individuals are prized by collectors.] Slowpoke get their name from the fact that they are incredibly slow-witted, despite their part-Psychic typing. Their pain receptors are so deadened that a Slowpoke can take more than a day to feel pain if it is bitten on the tail, which is probably the most pain-insensitive part of its body. In fact, the quickest recorded response time to a painful stimulus in a Slowpoke is an astonishingly sluggish five seconds. The tail also creates a sweet sap, which it uses to attract fish. Though the sap has no nutritional value, the tail is considered very pleasant to chew on. As a result, Slowpoke poachers will cut off their tails and sell them on the black market for a hefty price; the Team Rocket poaching operation at the Slowpoke Well near Azalea Town in Johto is a particularly infamous example. While not fatal, this is still an exceptionally cruel act to the Slowpoke, because they cannot hunt while their tails grow back. While they can survive for a long time without eating due to their slow metabolisms, in the interim it puts them at a severe disadvantage; furthermore, said slow metabolism also makes the process of regrowth very slow as well. 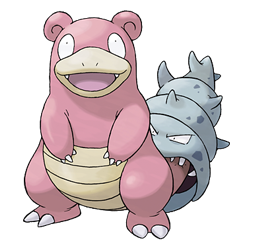 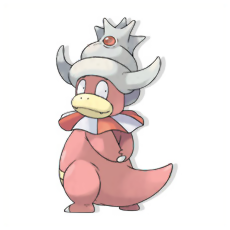 The other, far more rare evolution of Slowpoke is Slowking. A Slowking is created when a Slowpoke that has acquired a King's Rock is bitten directly on the head by a Shellder. The combination of poison from the Shellder that leaks directly into its brain and the inherent energy within the King's Rock causes a boost in intelligence and Psychic power. The Shellder morphs into a form resembling a crown, with a ruby-like pearl in front, and the Slowpoke gains a ruff, belly scales, becomes bipedal, and loses the white on the end of their tails. Slowking are extremely intelligent, with cognitive abilities matching that of humans. They serve as leaders for their Slowpoke and Slowbro brethren, and spend their time learning anything they can about the world. A few are actually capable of human speech, though this is a very rare ability. It is said that if the Shellder on its head is removed, it forgets everything that it has learned; however, it would be more accurate to say that it forgets how to access its knowledge. Due to the Shellder expanding its intelligence, as opposed to the simple increase in intuition it provides to Slowbro, scientists are studying Shellder poison to see if it can help people who have suffered brain damage in the past.

In both cases, the compound made by the Shellder makes it nearly impossible to separate it from its host.

Slowpoke and its evolutions are fairly common within Kanto and the Sevii Islands, though Johto's Slowpoke population is concentrated mainly inside the Slowpoke Well in Johto and the Tohjo Falls right at the Kanto-Johto border. People in nearby Azalea Town have a legend that states that a Slowpoke can cause rain by yawning. It is likely that what they are referring to is Rain Dance. Small populations also exist on Route 205 in Sinnoh and the Abundant Shrine in Unova. Within Kalos they can be reliably found on Route 12 and within the Azure Bay, and there have been sightings within caverns on islands off the coast of Hoenn.

The Slowpoke line is piscivorious, living mainly off of fish, though Slowbro and Slowking tend to be more active hunters. They are also opportunistic enough to eat Pokémon eggs if they come across any.

The Slowpoke line is very docile and poses very little threat to humans if left alone. That being said, as with any other Pokémon, trainers are strongly advised not to provoke it. Slowpoke's main method of defense against a threat is to use Yawn, which uses a gas exhaled from Slowpoke's lungs to put an opponent to sleep while it gets away. If that doesn't work, Slowpoke will attack with Confusion, Headbutt, or Water Pulse. Slowbro are far more physically powerful, and their inability to feel pain means that an enraged Slowbro will fight until it is physically unable to go on, which may not necessarily before it beats its opponent into a bloody pulp. Slowking prefer to avoid conflict, but if they are attacked they will use powerful psychic techniques to defend themselves. Luckily, it takes a lot to cause them to become hostile.

All members of the Slowpoke line can breed. Their mating ritual consists of a female simply releasing pheromones that attract males and mating with every one she meets. She then lays 10 eggs and watches them for two weeks until they hatch, at which point she leaves them.

Slowpoke and Slowbro live in loosely defined groups led by Slowking. Some Slowking get frustrated at the low mentality of the group and decide to either travel on their own or join up with humans for further intellectual stimulation. Written by rmctagg09