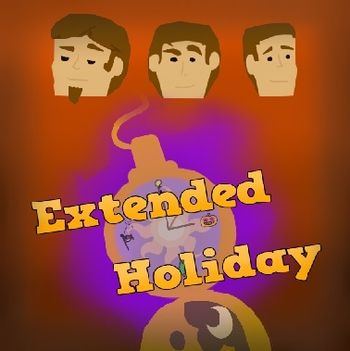 It's a long trip...
All Chrysalis would get to see in the moment she looked over, was a being who just would not die.

is a collaborative My Little Pony: Friendship Is Magic fanfiction written by authors American_Brony

, and edited by Vital Spark aka OmniKitsune

Adventure, Mayhem, Magic of unknown origins, oh and Talking Ponies. All being unrelated events have brought three friends together into the wildest holiday that anyone could imagine. What started as a small Halloween talk, as well as showcasing their own costumes to one another. However, due to actions outside of their control, or even any desires, they land in a new land during a turbulent time. They soon find themselves dealing with a threat, Mistaken identities based on their costumes of a Nobleman, A Soldier, and a Monster Hunter. It also does not help their minds that they are roped into helping prepare for a wedding between the Captain of the Guard and one Princess Mi Amore Cadenza. All they know is, That they will be taking an Extended Holiday from any reality they know about.

An Extended Holiday provides examples of: