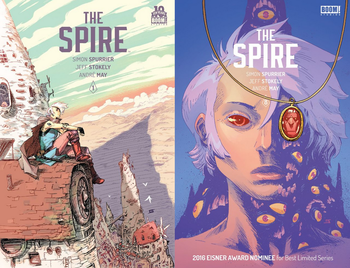 Covers of the first and eighth issue.
The Spire is a limited series by Simon Spurrier and published by Boom! Studios.
Advertisement:

In a future wasteland, the vast city called The Spire deals with religious fanatics on the outside and racial strife within between the nobility and the "Sculpted", lower-class citizens with nonhuman parts. In the midst of this, Sha, the captain of the city police, tries to solve a string of murders before rising tensions derail the new Baroness.