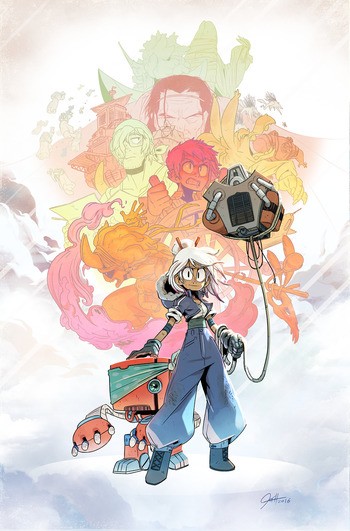 Tyson Hesse's Diesel is a comic book written and drawn by Tyson Hesse and published by Boom! Studios as a part of their BOOM! Box imprint.

Up in the sky, there is the mobile community of Peacetowne. And in this community resides Dee Diesel, a brash girl who's more than ecstatic because her eighteenth birthday is around the corner, which means that Peacetowne will soon become property of the Diesel family. The only downside is...she's not exactly very responsible. Or good with gadgets. Or anything for that matter. For what it's worth, she can somehow generate a lot of static electricity.

Of course, that can only get her so far in life, especially considering everything changes when Dee starts seeing lightning that explodes, followed by a massive battleship flown by creepy birdmen called the Teppan. Next thing she knows, she finds a weird engine that can fly whenever she interacts with it.

And this is only the beginning of her adventure...