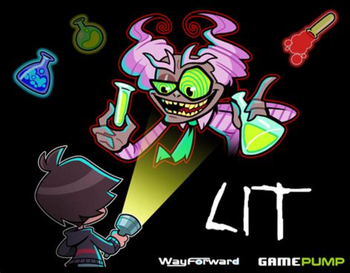 LIT is a 2009 WiiWare game, developed by WayForward Technologies. It is a classic "use the objects to construct a path to the exit" puzzle game, dressed up as Survival Horror.

The plot is as follows: Jake, the protagonist, has become trapped in his school, which has been plunged into darkness. Dangerous creatures lurk in the darkness, and Jake must use the various light sources around to safely navigate a path to the exit. However, turning on too many things at once and filling the light meter at the top will cause a fuse to blow, sending you back to the start of the room.

Occasionally a room will have a ringing phone; making it to the phone and answering it before it stops ringing will let you listen to a phone call from Jake's girlfriend, Rachael, as she works to escape from the school as well.

In October 2015, a version of the game with a different, more cartoon-ish and "cutesy" art style but the same characters and basic gameplay was released for iOS and Android, and this version was also released

With the disabling of adding/purchasing Wii Points on March 26, 2018 followed by the complete closure of the Wii Shop Channel on January 30, 2019, the original game is no longer available for download.